When Jim Brainard was first elected mayor of Carmel, the year was 1996. Some of today’s eligible voters weren’t born yet. A gallon of gas cost $1.22. Cell phones were heavy. Most people didn’t use the Internet and many voters didn’t have computers at all.

“I had zero name recognition when I started,” he said. “I went on TV and tried to build the name recognition. I went to thousands of doors. I heard from people that they wish there was more to do in Carmel. ‘I wish I could go out to dinner and a show. There’s no downtown to show our out-of-town guests.’ There were no trails or parks. Traffic was pretty bad.”

Brainard said he was considered an underdog and many were surprised to see him win.

But now – 20 years later – Brainard himself is the entrenched incumbent. And now City Council President Rick Sharp hopes to upset the five-term mayor.

Sharp was first elected to the City Council in 2004 and he said at first he was a fan of Brainard’s vision for Carmel. In many ways, he still respects it. He said he appreciates the mayor’s ability to be “a dreamer” but now he feels it’s time to stop “dreaming” and start responsibly steering the ship.

He said Carmel’s debt has reached the level where spending needs to be curtailed to avoid a special benefits tax from being levied.

“We can’t add to the debt without a tax increase,” he said. “I’m talking about a certainty in the future looking at the numbers right now.”

Sharp characterizes himself as more financially conservative than the mayor, but he disagreed with critics who paint him as an extremist who would refuse to spend on amenities. Sharp keeps saying that he supports The Palladium, but felt some of the flourishes added unnecessarily to the budget – and over debt – of the project.

“I’m tired of hearing about a hall that will stand for hundreds of years,” he said. “We didn’t build the Parthenon or the Coliseum. We built a concert hall. The administration should have made a much greater effort to adhere to the budget that was promised.”

Going door to door, Sharp said he hears from lots of voters that they feel it’s time for a change after nearly 20 years of Brainard. He also hears from some people who are Brainard-supporters.

“The other thing I’m hearing is that I’m out to destroy the quality of life in Carmel,” he said. “That I’m going to slash everything to the bone and there will be no festivals or parks. No CarmelFest. No Fourth of July parade. We can afford these things but there are things that Carmel is doing that’s unnecessary.”

And the fixes he said would be easy – but it will take new leadership.

“I don’t think the next generation of Carmel leaders should have to face this problem,” he said. “It was created by this generation and we should take the steps to address this.”

While Sharp has built his campaign on what should change about Carmel, Brainard’s campaign ads and Facebook page feel like a promotion for the city.

“You can ask people,” Brainard said. “They love living in Carmel.”

Brainard said he thinks the facts speak for themselves, and that Sharp might talk about a debt crisis, but then why would bond raters give the city of Carmel an AA+ rating?

“You try to keep it simple,” he said. “It’s not a college class. You stand by your financial record and remind people about everything Carmel has to offer.”

Of course, one number that everyone will also look at in this election: margin of votes. Brainard has won with around 60 percent of the votes in the past several elections. And it all started with his upset of mayor Ted Johnson.

“I think it was a surprise to some people,” he said. “It was a much smaller community then. There’s nothing like getting out and talking and listening to people. That hasn’t changed.”

“The vision we put into place many years ago is paying off quite well for the city of Carmel, its businesses and residents. We know that. You know that. But it’s nice, every now and then, to see that others get it, too.”

“Carmel residents enjoy the lowest taxes of any major city in the state. An awful lot of people in Carmel are paying less in property taxes today on their homes than they were 20 years ago. That has taken a lot of tough management through several recessions. That is a record I am proud of.”

“Why we’ve grown so quickly is we’ve built the infrastructure in the ground that we need before we have a problem. It’s allowed us to become one of the most competitive cities in the country, and people here, it’s in their DNA that infrastructure is important.” 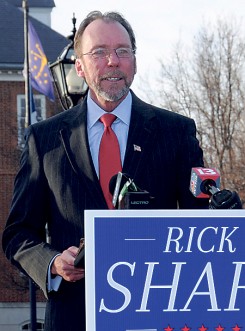 “Simply saying you’re a fiscal conservative doesn’t make you one. A record of consistently overspending is not fiscally responsible.”

“Local newspapers have dubbed me a ‘fiscal hawk’ and I wear that badge with honor. I will rein in spending, because I understand that it is your money that government is spending. I will make Carmel fiscally responsible once again so that our city can continue to flourish.”

“I’m sure you’ve heard the spin by now. The Mayor and his operatives – some of which are paid by your tax dollars – are doing their best to convince you that they can keep swiping the city’s credit card with no repercussions. Well, here’s a number they can’t spin: $11,809.36. That’s your share of Carmel’s debt. That’s not our number, that’s the Indiana Department of Local Government Finance’s number.”