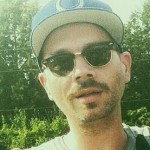 A Cobblestone Grill employee, Chaz Bennington, was found shot to death in his Far Northside apartment on May 31. The Marion County Coroners office has ruled his death a homicide.

Bennington had been working at the Cobblestone Grill in Zionsville for the past 15 years and worked at the previous restaurant, Pasta Bella, for several years before that. There he met Liz Ezra, who owns Cobblestone Grill with her husband Kent. Liz Ezra calculates that she and Bennington worked together for nearly two decades.

“He touched everybody that he met,” she said. “He was a special guy. Amazing.”

“I just don’t believe he’s gone,” said Kent Ezra. “We all loved him dearly. He’s one of those guys – if he loves you and cares about you, you know it.”

“It’s a massive, massive hole that he’s left,” he said. According to Kent Ezra, Bennington wore multiple hats at the restaurant, from server to manager to kitchen.

Steve Russo, a frequent customer to Cobblestone Grill, couldn’t make sense of the violence behind the murder. “There’s no rhyme or reason to it,” he said.

“He was a dear man and a great friend of so many at Cobblestone,” said Russo. “He was an extremely kind, extremely gentle person who was very much a loving father.”

“Chaz was always there with his smile,” said Gale Welch, who also frequented the restaurant with her husband Chris who once worked with Bennington. “Chaz was an awesome guy.”

“I hope they find out what happened,” said Welch.

A calling will be held on Saturday, June 13 from 2 to 6 pm at Indiana Funeral Care and Crematory, Harry W. Moore Chapel, 8151 Allisonville Road, Ind. In lieu of flowers the family requests donations be made to the Preston Bennington College Fund to benefit Bennington’s son. Donations are being collected at Cobblestone Grill.

Cobblestone Grill will hold a special event to celebrate the life of Chaz Bennington beginning at 6 p.m. June 14. The restaurant will serve heavy appetizers, and all drink revenue and donations will benefit a scholarship fund for Bennington’s son.