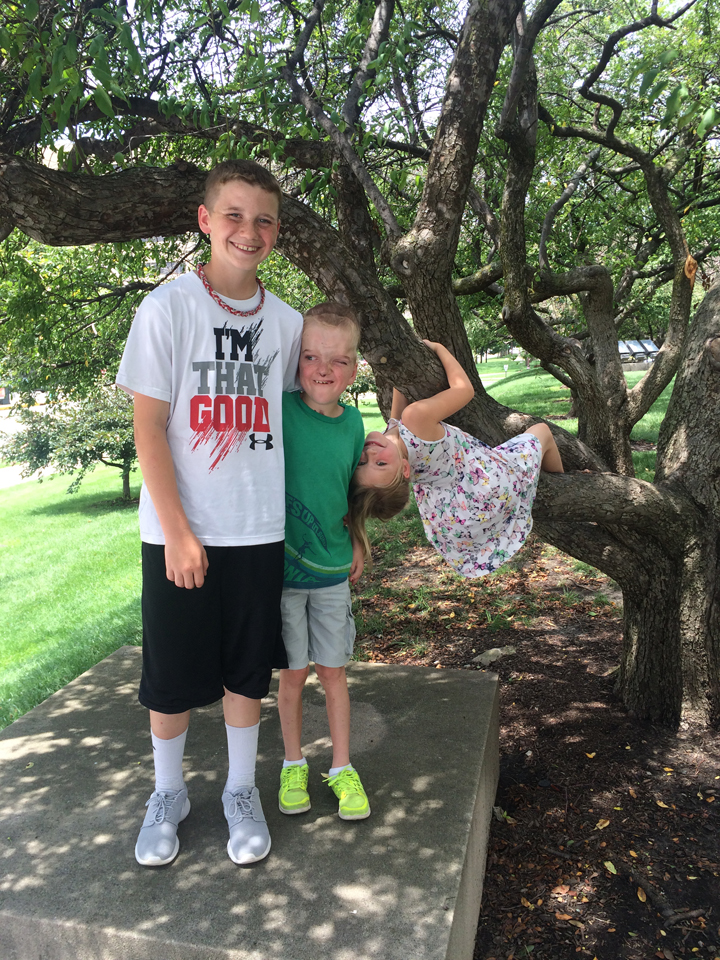 It’s been a long road for Jude Miles. The 10-year-old has had more than 30 surgeries and procedures in his short life (“I only count the ones that make him bleed,” quips his mother, Abby Miles) and he isn’t done yet.

Jude was born with Apert syndrome, a rare condition that causes abnormal development of the skull. The defective gene causing Apert syndrome can allow the skull bones to fuse together prematurely, and as the brain continues to grow pressure is put on the skull and face. Jude was less than 3 months old when he underwent his first cranial vault, and the doctor was unsure that he would survive.

Later surgeries relieved pressure on his skull, reshaped his face, separated his fingers fused at birth, and addressed a lung not connected to his airway – unrelated to Apert syndrome but Abby said, “Jude likes to do things with an extra flair.”

But young Jude’s most recent major surgery has created a pinch on the family and prompted Miles to start a GoFundMe account to make ends meet.

The family’s insurance covers 80% of their medical expenses, and for a long time Jude was covered by a federal Medicaid needs-based waiver. Due to a recent clerical error, however, his coverage was dropped and there is a 15-year waiting list.

This surgery is the first since the loss of Medicaid and the family was shocked at their estimated portion of the bill, roughly $35,000.

During 10 hours in the operating room, doctors adjusted the bones in Jude’s face which were growing inward causing a concave appearance. The surgeons reshaped and narrowed his face through the same incision as his prior head surgeries, removed some bone, put in a bone graft and added several plates to hold the bones together.

“Otherwise his bones will just start growing back the way they think they should grow,” Abby said.

He recovered more “miraculously,” Abby said, than doctors expected, staying in the hospital only five days when at minimum a week was anticipated.

The five family members – including siblings Lola and Max and father Freddie – live incredibly simply in a small Zionsville home with minimal furnishings. Miles has been “blown away” by the generosity of the Zionsville community, with Jude’s friends at Boone Meadow Elementary selling lemonade and bracelets and others donating food.

“It’s been such a blessing to watch it unfold, at how much he is loved,” Abby said.

Jude will encounter more surgeries in the future to repair a nose graft, reshape his forehead and widen the gap between fingers.

“No one thought that he would need as many surgeries as he did,” Abby said. But he also has surprised his family and medical professionals in a positive way.

“You never know what that kid’s going to do, which is great in a lot of ways,” Abby said.  “They didn’t think that he would be able to walk or talk at one point. He’s really exceeded all expectations.”

Jude’s progress can be followed at AbbyMiles.wordpress.com and donations can be made through http://www.gofundme.com/s4e6fjs