You are at:Home»Current in Carmel»Carmel Community»Mayor urges quick passage of anti-discrimination ordinance 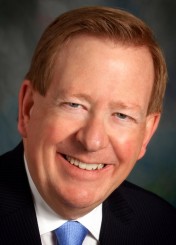 Carmel Mayor Jim Brainard is urging quick passage of an anti-discrimination ordinance that will be introduced at the Aug. 17 meeting of the Carmel City Council.

A rally will take place at 5 p.m. outside Carmel City Hall to urge councilors to not send the bill to committee and instead suspend the rules and vote to pass the bill immediately.

Check youarecurrent.com for updates on the vote after the meeting.

This new law comes on the heels of fallout from the passage of the statewide Religious Freedom Restoration Act. The contentious piece of legislation led some Indiana businesses to threaten to move because they viewed it as hostile toward the gay and lesbian community.

“It becomes important for Carmel to make a statement to the business community and others that we treat others fairly,” Brainard said. “Not that there’s a problem, but to make a statement. I had business leaders tell me that they hired new employees from the East Coast and these (potential) employees told them they were going to decline the employment offers. So yes it was a concern.”

The idea for the law came about after an election debate between Brainard and his opponent for mayor, City Council President Rick Sharp. Both candidates said they would support such a law, and Sharp is one of the ordinance’s six sponsors.

“It’s one of the few things we actually agreed on,” Brainard said.

The law states that, “no person, corporation, partnership, company, or other individual or entity located within, or conducting business within, the City’s corporate limits shall discriminate against any other person in the provision of and/or opportunity to participate in or enter into a place of business, obtain housing, use public accommodations, obtain an education, obtain and maintain employment, enter into a contract, and/or participate in or obtain any program, service, or amenity provided to the general public on the basis of the latter’s race, color, religion, national origin, gender, disability, sexual orientation, gender identity or expression, family or marital status, ancestry, age, and/or veteran status.”

Brainard pointed out that one exception is for churches or religious institutions, but not the businesses they might own or operate, such as the coffee shop owned by Northview Church.

Brainard said it might be redundant in some ways with laws already on the books, but that it strengthens the city’s position and allows violators to be fined. He said it’s a big deal because there’s no protection of this kind for groups statewide based on sexual orientation or gender identity.

“We have to treat people with respect and dignity,” he said.

City Councilor Eric Seidensticker did not sponsor the bill and hasn’t decided if he’ll vote on it. He said he doesn’t discriminate in his own business, Maco Press, but that he thinks it’s not government’s role to tell private businesses what to do.

“I think the private sector can handle this,” he said. “If a business discriminates then people will stop going there and they’ll lose money. I don’t have such little faith in people that I think a law is necessary to prevent discrimination.”

Seidensticker said the best remedy is for parents to teach their children that discrimination is wrong. He said he thinks the ordinance was drafted to score political points.

“The people of Carmel, indeed the people of Indiana, have always been warm, welcoming and friendly to all, both friends and strangers. The term Hoosier Hospitality comes to mind. And while we should all respect the religious beliefs of our fellow citizens – whether they be Jews, Catholics, Christians, Mormons, Muslims, Hindu’s, Atheists, Agnositcs, or one of many other faiths and beliefs – I feel it is important that we recognize there is a distinct difference between how we worship our God in our churches, our homes and our hearts versus how we live, play and conduct business in the melting pot of mixed faiths and passions that we call America.

“Many of the world’s traditional faiths teach and believe the following: Men and women from all walks of life must be treated with respect, compassion and kindness and every sign of unjust discrimination in their regard should be avoided. It is time that we stop trying to define each other by the variety of labels society has created. It is far past the time that we look past the colors of our skin, the appearance of our bodies and the choices we make in the privacy of our own lives. It is time we see each other as human beings first and foremost.

“The ‘free exercise of religion’ guaranteed to U.S. citizens in the First Amendment to the Constitution does not give one the right to discriminate. If one were to claim that their religion allows discrimination in treatment of  certain groups does it not follow that one can then be exempt from being charged with murder, robbery, theft and other crimes so long as it is done under the auspices of some ‘religion?’

“I hope that this ordinance will make clear to everyone that Carmel continues to be a welcoming place for anyone to pursue life, liberty and happiness with a common respect for each other’s dignity.”