You are at:Home»Current in Zionsville»Memorial Fund set up to honor spirit of DJ Preece 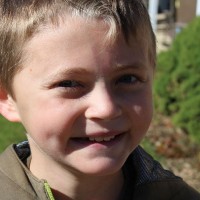 His parents, Doug and Denise, hopes to keep DJ’s giving spirit alive for years. DJ, a Zionsville Middle School seventh grader, died on Sept. 12, 2015, after a sudden 24-hour illness at age 12. The autopsy revealed he suffered from appendicitis, but he didn’t show the usual signs of fever or doubling over in pain.

The family, which includes 14-year-old sister Arden, has set up GoFundMe campaign (gofundme.com/wpb4s2p8) to raise $10,000 for the DJ Preece Memorial Fund for three objectives. The family is provided their own funds as well.

“The purpose is to enable us to perpetuate his memory,” Doug said. “One of the challenges is he passed away in September, and you look back and it’s coming up on just five months. To us in certain ways it seems like it’s been forever, and it other ways it was just yesterday. When you think about that, how do you perpetuate his memory a year, five years, 10 years, 20 years? That’s a challenge.”

The first objective is to cover the cost of an original piece of music to be arranged and performed by DJ’s ZMS bandmates in his honor.

“They’ve brought in an external composer to help with the arrangement, and he is working with the students,” Doug said.

The second is to fund an annual scholarship to send one ZMS student to the Indiana Conservation Officer Organization’s Karl E. Kelley Camp in West Lafayette. DJ had gotten a scholarship through Pheasants Forever to attend it in June 2015. The camp is for fifth and sixth graders.

“He said it was the time of his life,” Doug said. “I’ve already made arrangements with a camp director to reserve a spot for a ZMS scholarship student.”

There would be a plaque with the recipient’s name on it each year.

The third objective is to provide an annual award to a deserving Boy Scout from DJ’s Troop 804, Zionsville, to offset a portion of their fees for summer camp or other scouting activities.

“We don’t expect to fund these fully going forward strictly on the GoFundMe,” Doug said.

Any additional funds would end up with the United Methodist’s R.O.C.K. program, a before- and after-school ministry. DJ was a junior staff member.