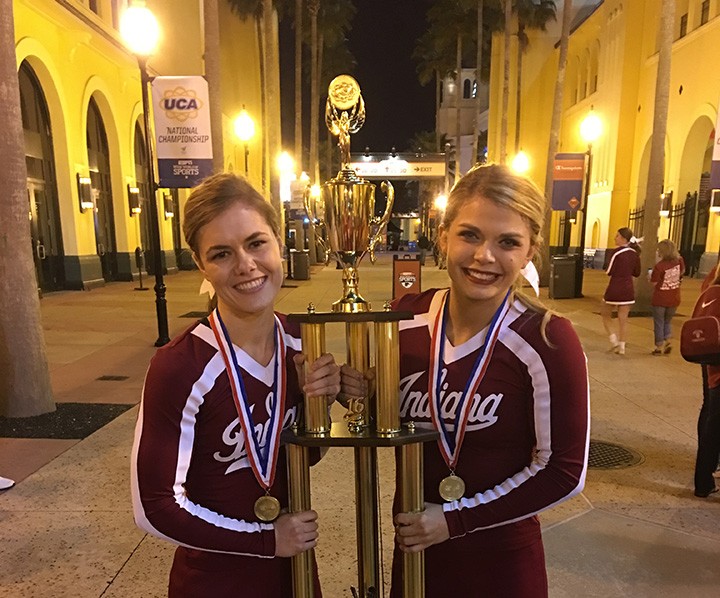 From Carmel Pups Cheerleading to Indiana University to the US Nationals, Carmel High School alumnae Kirby Lynch and Kaylin Lapel have worked their way to the top of the cheerleading pyramid.

“This team, in the sport of cheerleading, is equivalent to participation in the Olympics. They will proudly be wearing USA across their chests and compete against all other international cheerleading teams,” said Lisa Knipp, who coached the girls at CHS. “This accomplishment is staggering when you consider there are approximately 400,000 cheerleaders in the US and these Carmel athletes are 2 of the 37 females talented enough to represent our country in the sport they love.”

Both girls are members of the IU cheerleading team that recently won its fourth national title for Division 1-A at the UCA College Cheer and Dance Championships at Disney World’s Field House, beating out rivals from the University of Alabama. Teams are scored on the difficulty as well as execution.

During each of their senior years, Knipp encouraged both Lynch and Lapel to pursue college cheerleading. Knipp was impressed by their talent, positivity and willingness to try new things, and she knew these things would take them far in their sport.

“Both Kirby and Kaylin brought an unprecedented will to prepare to be the best that they could be throughout their high school cheerleading careers,” Knipp said.

Both cheerleaders credited their time at CHS in helping them prepare for the cheerleading success they are experiencing. The college team focuses on teamwork and catching each other when they fall.

“We consider ourselves family,” Lapel said.

“I’ve learned not to worry about anyone outside of the mat, because then I’m not focusing on my teammates and what we’re about to do,” she said.

The all-female Indiana University squad is coached by Julie Horine.

“Lynch and Lapel are very strong in their skill sets that contribute to the overall success of the team,” Horine said.