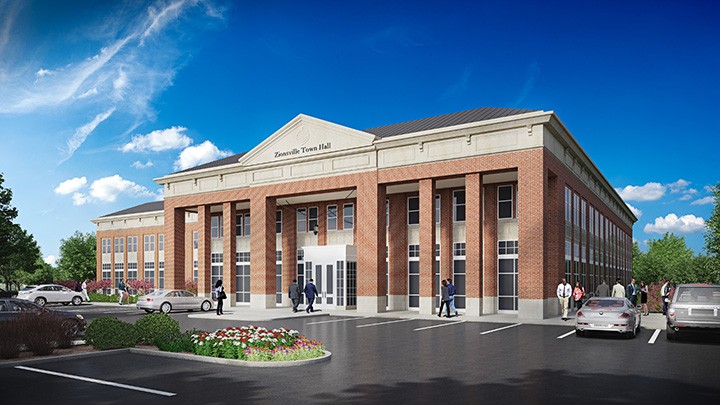 A rendering of the proposed Town Hall. (Submitted rendering)

Zionsville’s new town hall building is one step closer to reality, as the Town Council approved a resolution March 7 that outlines a financing plan for the $10.2 million project.

The council discussed the plan to use installment purchase financing, which works much like a mortgage, at its January meeting but delayed a vote after residents expressed concern about the cost and scope of the 41,300-square-foot building. The town held two open house meetings to discuss the project with the public, and Mayor Tim Haak said he met with other residents and professionals in private settings.

Those meetings led to some changes in the project, Haak said, such as potentially eliminating the basement, altering room layouts and reconsidering roof and façade details.

But the biggest cost-saving change to date comes from the decision to not use Keystone Realty Group or another third party to act as a developer to manage construction and financing of the project. Instead, the town will adjust the charter of the Zionsville Town Hall Building Corporation, which owns the current Town Hall building, to allow it to serve in that role.

“(It is) able to perform the same function at no cost to the town, which saves the town about $400,000,” Haak said, adding that the town won’t adjust the total project cost estimate until after receiving construction bids.

Councilor Tom Schuler was the lone vote against the financing plan (councilor Elizabeth Hopper was absent). He said he’s not against the idea of a new town hall, but he believes – like many residents who voiced their opinions on the project – the proposed plan is too big and too expensive.

“We had 100 percent negative response (from residents) in emails and phone calls and in person. There wasn’t one person who thought we should spend this money,” Schuler said after the meeting. “People understand the reasoning for a new building, but not the magnitude, particularly if you look at the condition of our streets.”

Haak said he and other councilors have received “a lot of positive responses from the public regarding the need for a new town hall.”

The mayor told the council he has reached out to six banks to consider financing the project and had received proposals back from two of them, with additional proposals expected by the end of the week. He expects officials to select a proposal within a couple of weeks.

The resolution limits the loan’s interest rate at 5 percent during the initial term of the installment purchase contract. Haak said the financing could have an adjustable interest rate or be set for the life of the loan.

The project still needs approval from the Zionsville Plan Commission. Its next meeting is scheduled for 7 p.m. March 21 at Town Hall.

The town had previously discussed selling bonds – a more traditional form of government financing – to pay for the new town hall. Using an installment purchase contract instead allows the town to avoid paying fees associated with bonds and gives the town greater discretion on which funds are used to make payments.

The plan calls for mostly using funds that will be available to the town in the future but were not included or available in the 2016 budget. Officials have discussed using an annual $283,066 in additional County Option Income Tax revenue that was not calculated in the most recent budget, $115,000 from food and beverage taxes, $55,000 from the Cumulative Capital Development Fund, and $94,000 in revenues from the Quail Run TIF area, which includes the site of the current town hall that is expected to be torn down and redeveloped into retail. Other funds could come from Boone County TIF revenues.

Schuler said he believes these funds could have been more responsibly spent elsewhere.

In other news, the council: