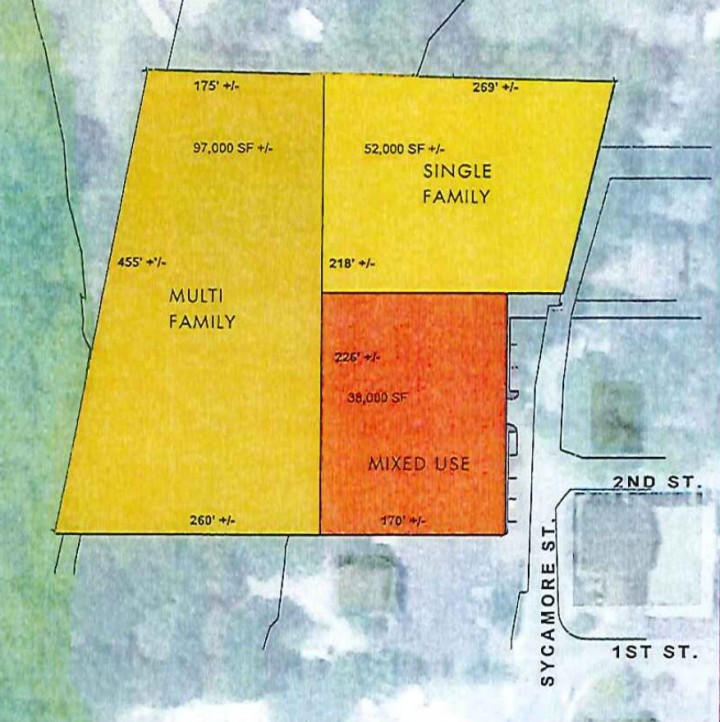 After filing for continuances at both the February and March Zionsville Plan Commission meetings, developers proposing a mixed-use planned unit development at Sycamore and Second streets, dubbed 200 West, is hoping to finally see an outcome at the next meeting.

The petitioner, 200 West Partners, LLC, is looking to utilize the 4.32 acres of land for up to 15 single-family homes, 75 multi-family homes and commercial and retail use. Housing structures would be as tall as 55 feet and a commercial office building and a sit-down restaurant would total approximately 40,000 square feet.

But while the proposal has yet to be discussed at a commission meeting, numerous Zionsville residents have already pledged their opposition in the form of a petition. As of press time, the petition, Vote No to a PUD at 2nd and Sycamore, had approximately 200 signatures.

One of the biggest concerns that petitioners have is the added traffic. A cursory review has been conducted by engineers involved with the PUD, but residents questioned whether it was enough.

“What would the effects be on the traffic? A cursory review is hardly a comprehensive study on what’s going to happen,” said Bob Royalty, a Zionsville resident. “Even the cursory review had 2,000 extra trips per day with about 200 additional trips during the peak hours.”

“This is not a local, few blocks away issue,” said Zionsville resident Lena Funkhouser. “There are a lot of people who are opposed to (the PUD) and don’t live near here, but they travel through here.”

Remonstrators believe that infrastructure improvements are imperative suggesting that, if approved, the developer should commit to making improvements to accommodate the traffic increase.

“If we’re not going to do it as a town, then why aren’t we turning to the developer who stands the most to gain and saying, ‘If you want to do this development, then what you have to do is widen the streets,’” said John Tousley, a Zionsville resident.

Another major issue petitioners have with the PUD is what the final product will look like. While some details have been released, nothing is final and could change following approval by the commission.

“It’d be nice to know what exactly is going on with a particular piece of land,” remonstrator Gary Angstadt said. “We have three areas of the four acres: a commercial corner, a multi-family development and a single family, but other than that the details would be left to a lead of time. We really don’t know what we’re getting other than the concept of those three areas.”

A final concern is how the new developments would define the village.

“Seventy-five apartments in a 55-foot-tall building; Zionsville has nothing that massive,” Angstadt said. “I can’t even visualize what that would like. It’s just something we don’t have in town and we’re not sure why we need it.”

“It is vision of what the village is going to be,” Tousley said. “It is going to have an impact on the adjacent neighborhoods no matter how it’s done or where it’s done, but it’s important to make sure that that impact is one that compliments or at least is not detrimental.”

A representative of 200 West Partners LLC did not return calls seeking comment as of press time.