You are at:Home»Current in Zionsville»A second chance: Officer adopts dog he helped rescue from dumpster 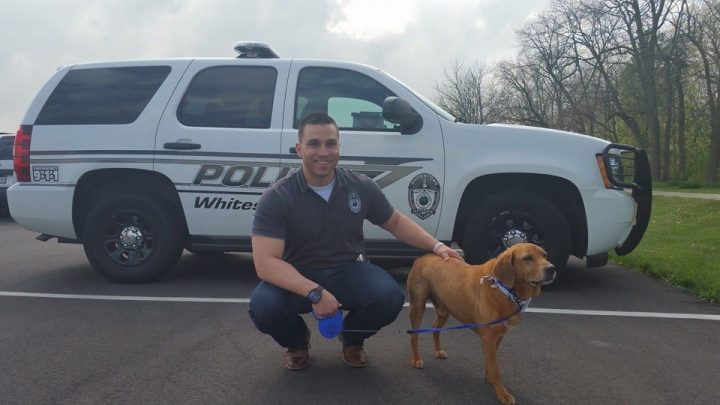 Whitestown Police Dept. Officer John Jurkash adopted a dog he helped rescue from being abandoned in a dumpster in March. (Submitted photo)

His name is Chance. A playful, friendly dog. You’d never guess that about two months ago he was huddled in the corner of a dumpster in Whitestown on a miserable, rainy night.

“It looked like he had been there for a while and had pretty much given up,” said Whitestown Police Dept. Officer John Jurkash, one of the first on the scene after a call from a family who’d heard the dog’s whimpers. “He looked defeated.”

Originally named Ray (after the dumpster), the dog was rescued and taken to a foster home to recover. But there was something about him that Jurkash couldn’t get out of his mind.

“He reminded me of my dog back at home who lives with my dad now,” the 26-year-old said. “And before this call even happened my wife and I had been talking about getting a dog for about a month. I am a person of faith and I believe everything happens for a reason. So to find this poor guy who was abandoned and left for dead … it just seemed like the thing to do to give him a good home.”

But there were a few obstacles in the way. For starters, when Jurkash and his wife, Mallory, went to visit Chance, the reception they received was anything but friendly.

“This was about a week after he was recovered and his demeanor was so untrusting of humans. He was absolutely petrified when we came in and sat around a corner looking at us,” Jurkash said. “We wanted a dog that would be loving and playful, so we were a bit skeptical and thought that with his unfortunate trauma he was going to have some damage and be a lot harder to work with.”

The couple was also getting ready to move into a new home.

“We did not want to bring him into an environment and as soon as he got acclimated make him go through a move,” Jurkash said. “That’s stressful enough for humans, so imagine a dog. We wanted to get settled in first and also give him more time to move past the incident and try to restore normalcy.”

And, as the saying goes – time did indeed seem to “heal all wounds.”

“The day we got him he was just the opposite – he was jumping all over me and barking and really playful,”Jurkash said.

Chance has settled into his new home and “very much thinks he is the king of the castle.”

“Even though we tried to keep him from being a furniture dog, he broke through that barrier,” Jurkash said. “And he sleeps on the bed every night with us. He is always by our side like our shadow.”

As for whoever left Chance to die in the dumpster – that’s still a mystery, Jurkash said.

“There are no leads, but the important thing is we got him rescued and he has a good home,” he said. “Like I said earlier, everything happens for a reason, and I don’t think he was put in our lives to pass by.”