You are at:Home»Current in Carmel»Carmel Community»Meet your leaders: Richard F. Taylor III

As Hamilton County Leadership Academy celebrates its 25th anniversary, Current is highlighting local leaders who have helped to build and sustain the program, which focuses on strengthening our community by developing informed leaders. 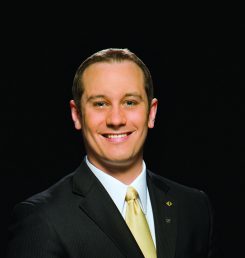 Career: A graduate of Purdue University’s Krannert School of Management, Taylor is a vice president at The National Bank of Indianapolis’ Carmel Banking Center. He is currently working on an MBA at Butler University.

Nice to know: Taylor and his wife, who is president of Holder Mattress, are both avid Purdue and Colts fans. They have two dogs, Ripley and Peyton.

Favorite HCLA curriculum activity: “My favorite trip was to the Hamilton County Jail. I was amazed at how efficiently the Sheriff’s Department handled a daily population of 300 to 350 inmates. I was also impressed by the on-site treatment programs (it) offers juvenile offenders.”

What impact has the program made on the community? “HCLA continues to train and produce new community volunteers and leaders. If you look at the rosters of many local nonprofit boards of directors, you will typically see at least one HCLA graduate on that roster.”

What one change would you love to see that would improve our community for everyone? “I would like to see changes to the state of Indiana’s school funding formula. Many Hamilton County schools receive very low per-student funding as compared to other school districts based on the current formula.”