You are at:Home»Current in Fishers»Fishers Community»Brooks expected to have competition if she runs for Congress again 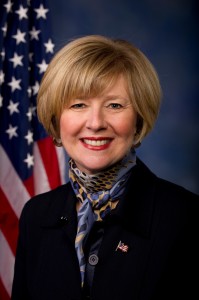 U.S. Rep. Susan Brooks, a Republican who has represented the 5th District for two terms, has thrown her hat in the ring to replace Gov. Mike Pence on the ballot this fall.

If she doesn’t end up being chosen to run for governor, then Brooks could decide to run again for Congress. But it’s not guaranteed that she’ll get her spot back on the ballot.

Several Republicans have expressed interest in running for Brooks’ seat, and while some say they would pull their names if Brooks runs again, others plan to stay in the race no matter what. Brooks’ district includes northern Indianapolis and its suburbs, including Carmel and Zionsville.

On July 15, Donald Trump announced that Pence would be his running mate in this year’s presidential election, and that meant Pence had to pull his name from the ballot in the governor’s race because in Indiana you can’t run for two offices at the same time. Brooks had to do the same in order to be considered as Pence’s replacement.

Brooks’ two main competitors for the gubernatorial nomination are Lt. Gov. Eric Holcomb and U.S. Rep. Todd Rokita. Both also pulled their names from the ballot. A caucus date has been set for July 26 and a 22-member Republican state committee will make the decision. A lieutenant governor will need to be selected on Aug. 1.

Brooks’ congressional district will need to have a candidate by Aug. 15.

Once Brooks pulled her name from the ballot, Stephen MacKenzie, one of her opponents in the May primary, announced he would seek her seat, even if she isn’t picked for governor and would like to run again.

MacKenzie is a Fishers resident and military veteran with two tours of duty and nearly two decades in the Air Force Reserve.

“I think I would be a more conservative candidate than Brooks, and it’s time that we have someone that reflects our Republican values,” he said. “If you look at her voting record, she often votes with the democrats. She has voted to raise the debt ceiling.”

MacKenzie said he thinks he would have a better chance than in the recent primary because precinct committeemen will make the decision. He said they skew more conservative and they are educated about who he is, so he doesn’t have to worry about a lack of name recognition.

“She’s made it clear that she’s more interested in higher office at this point,” MacKenzie said.

Fred Glynn, a first-term Hamilton County Councilor, said he’s interested in running for Congress as well. If Brooks runs for governor, he said he’s most likely in, but he isn’t ruling out a run even if she decides she wants her seat back.

“If she does run again, I’d have to reassess,” he said.

Glynn said he considers himself more conservative than Brooks. He said he’s seen a lot of ways the federal government has gotten in the way of local government or small business, and he said he’d like to go to Washington to try to stand-up for small-government principles.

“I thought maybe I’d run for Congress in 10 or 15 years from now, but I’ve been asked to consider it,” he said.

State senators Mike Delph and Jim Merritt are not up for reelection, however both declined to speak on the subject of running for Brooks’ seat.

Carmel Mayor Jim Brainard has expressed interest but said he wouldn’t run if Brooks decides to run again. Carmel City Council President Ron Carter has asked Brainard to reconsider running for Congress because it would create a vacancy for mayor of the City of Carmel. Carter said he doesn’t want to see the precinct committeemen pick someone to be mayor that he thinks would be wrong for the city.

Laura Campbell, chairwoman of the Hamilton County Republican Party, said it’s pretty interesting to watch everything play out. She said there’s no guarantee that the precinct committeemen would pick Brooks if she wants to run again.