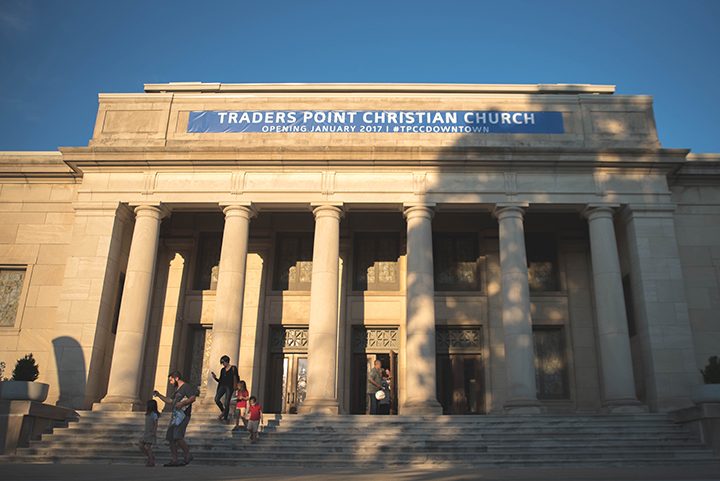 Traders Point Christian Church plans to expand into a building at 1201 N. Delaware St. in Indianapolis in 2017. (Submitted photo)

Thanks to a generous gift by one family from the congregation, who doesn’t want to be identified publicly, TPCC was able to purchase the 104-year-old historic former Jehovah’s Witness assembly hall, 1201 N. Delaware St., for $2.7 million in June and will now add a downtown Indianapolis campus, its third campus. TPCC added services at Creekside Middle School in Carmel early this year.

“We really have a heart for the city,” said Pastor Petie Kinder, who serves as the downtown campus pastor. “We love Indy. Indianapolis is an incredible place and we are excited to serve those living and working in downtown.”

TPCC holds worship services at the northwest campus in Whitestown and at the north campus at Creekside Middle School in Carmel. TPCC North will move from Creekside to a permanent location (1242 W. 136th St.) in Carmel in early 2017.

Kinder said the decision to add multiple locations is because people are driving to the Whitestown or Carmel services from all over Indianapolis.

“There are a few hundred people downtown that are currently driving out of downtown neighborhoods to attend the north or northwest Indy Traders Point campuses,” Kinder said. “Opening a campus downtown will provide a local place for those individuals to worship, serve and invite their friends to church. It’s a win-win to us.”

“We take child safety seriously at all of our campuses and want to assure we offer a safe and engaging environment for families to bring their kids to church, so we plan to renovate the kids ministry space accordingly,” Thomas said.

“It’s not about attendance numbers to us, it’s about making a difference” Kinder said. “We love the city of Indy and want to help with the work that’s already being done in the downtown area. For us, it’s about the people we will get to know and serve.”