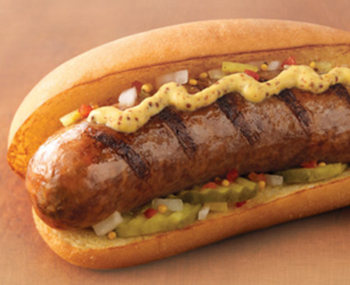 Annually we survey and observe tailgaters throughout this area, and the findings have changed only slightly over the last 20 years. The most popular food for tailgaters and Americans in general is the sandwich. This world-wide culinary favorite is the most popular because of its convenience. It can be picked up with one’s hands (no fork or other utensil needed) and consumed while standing, without mess or guilt. Many tailgaters consume more than one sandwich, where if same amount of food were served on a plate, receiving a second helping would be of some trouble to the host as well as lead to guilt of over-eating, etc. So what kind of sandwich is always a hit?

We have found that the Bratwurst is the favorite hot sandwich with 31 percent of tailgaters but it wasn’t always so. Back in the mid-90s we served a tailgate party to the student staffers for Penn State press box. Most of them had not even heard of brats. Today that’s not the case. Johnsonville, the country’s leader in sausage, has brats for sale from Maine to California. Hereare the two favorite sandwiches of tailgaters:

A great tasting Bratwurst or any other fresh sausage will taste better if it’s tender and juicy. When you see sausages cooking and there’s smoke and flames flaring up, don’t eat them – just walk away. All those flames and clouds of smoke mean the juices have escaped the sausage’s casing (outer skin) and fallen onto the coals or fire. Those improperly cooked sausages will be tough and dry.

Here’s an important point: don’t break the sausage casing with anything but your teeth. Put away those metal tongs and forks. So how do you cook brats so that they squirt juice into your mouth? Here is a recipe and directions for the best brats you ever had.

One 12 oz. can of beer (your favorite brand)

Day before – Place the uncooked brats into a sauce pan and cover them with beer. Drink the beer left over in the can. Bring the beer to a simmer and cook the sausages for 20 minutes. This process cooks the inside of the sausage without breaking the casings. After 20 minutes, remove the pan from the heat and cool it with ice and cold water. When cooled, take the brats out of the water with your bare hands (no metal) and place them into a plastic zip bag and store them overnight in your fridge.

On game day – Put the zip bag into your food cooler for transport to the stadium. Spray your grill with cooking spray and then heat it to cook the brats.  Using gloves (clean white cotton work gloves are fine) place the brats onto the grill. Keep a pot of cold water handy to dip the gloves into to protect your hands. Turn the brats until they are as brown as you want on all sides. Remember, the sausages are already cooked so you don’t have to cook them hard. Serve the sausages on buns, slathered with mustard and add chopped onions if you want.