You are at:Home»Current in Carmel»Carmel Cover Stories»Young yogi: Creekside student works to inspire others through yoga 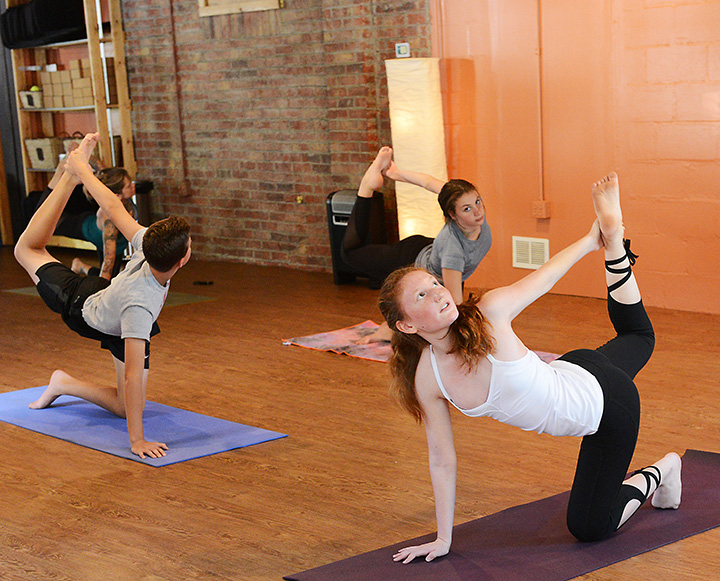 Anna Limauro of Carmel teaches a yoga class at Blooming Life Yoga Studio in Zionsville. Limauro is among the youngest yoga instructors in the state. (Photo by Theresa Skutt)

While many teens are characterized as moody and overdramatic, Anna Limauro is working on being the opposite. The 13- year-old Creekside Middle School student, who recently became certified as a yoga instructor,  wants to teach yoga techniques to other teenagers to help give them confidence. 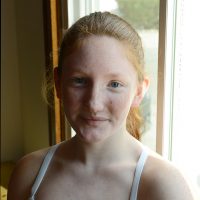 In May, Anna registered with Yoga Alliance, the nation’s largest teacher registry, after completing the Torchbearer of Tradition program. The new program, created by Zionsville-based Blooming Life Yoga Studio owner Lily Kessler, is aimed at youth ages 12 1/2 through 18.

The Torchbearer of Tradition program was initially created by Kessler because Anna was interested in participating in the 200-hour adult program.

“She just seemed incredibly dedicated,” Kessler said. “She has this insatiable curiosity.”

Anna was first introduced to yoga through a workshop designed to increase girls’ confidence. She started taking youth yoga classes, then –after developing a passing for it —  began attending adult classes in Zionsville and Carmel.

“I really liked it and wanted to learn the history of it,” Anna said.

Although she would like to learn more history, the Torchbearer of Tradition course introduced her to the basics and philosophy.

“Lily went out on a limb doing this program,” said Anna’s mother, Denice Limauro. “You never know how it’s going to be with kids being dedicated every other weekend. They treated them just like they were adults, the same class, the same material.”

The Torchbearer of Tradition program met every other weekend, all weekend, January through May. Referring to the time commitment, Anna said “it isn’t as long as you’d think.” Students spent time memorizing basic flow and poses and discussing the spiritual side.

Some of the teens in the program were facing high school finals that coincided with final evaluations, which Anna said caused some stress to the older students in the program.

Anna was even able to find some ties with her middle school classes.

“When we learned about Hinduism in social studies I was like, ‘Oh my God, I’m learning about that in yoga,” she said. “Something about yoga, too, is they’re open to everything in all the cultures.”

Eventually, Anna wants to incorporate the history and philosophy of the poses when she teaches. And she wants to instill in her students the feeling of confidence and acceptance that she first learned.

“I could see Anna being a master yogi,” Kessler said. “She is very interested in the philosophical aspects and the ways that they link traditions, cultures and world philosophies together. She is cultivating her language of how to weave modern day asana and modern day funky.”

“Lily taught us to be into the philosophy, because that’s where yoga started,” Anna said. “I just think I need to spread that message, too.” 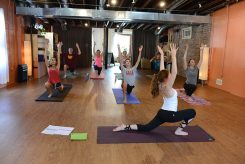 Anna Limauro (foreground) of Carmel teaches
a yoga class at Blooming Life Yoga Studio in Zionsville. Limauro is among the youngest yoga instructors in the state. (Photo by Theresa Skutt)
 

Lily Kessler was concerned that some of the adult conversations would be “inappropriate” for youth. So she created Torchbearer of Tradition, the first yoga program specifically for teens.

The 200-hour course covered everything in the adult program, but Kessler planned to keep the conversations at a less adult level.

But Kessler discovered that the teen conversations were tougher than some were in the adult classes.

“It was such an eye-opener for me of what kids are going through,” she said. “They are surrounded by drugs, alcohol, huge peer pressure, risky behaviors, suicide. Hearing them talk about their experiences, having to face these really huge world issues, I was blown away.”

Kessler said the safe environment of the yoga studio helped the teens cope with decisions.

“They had a safe place where they could talk about their struggles and how to make the decisions,” she said. “That was really cool. They started to step above and witness what was around them rather than be entrenched in teenage drama.”

Anna felt the same way about the impact yoga can have teens.

“When I will teach, I’d be doing it for confidence and being nice and getting out of the drama, and just using common sense and just being a normal human and being nice to people,” Anna said. “Doing good for the world.”

Family: Anna lives with her parents and two older brothers

Favorite (future) Travel Destination: Someday she would love to go to Italy