Thanksgiving Day is traditionally a day for families and friends to get together for a special meal. The meal often includes a turkey, stuffing, potatoes, cranberry sauce, gravy, pumpkin pie and vegetables. Thanksgiving Day is a time for many people to give thanks for what they have. It is also a time for parades that open the Christmas shopping season and, importantly, it is rivalry week in football, when cross town or cross state rivals meet. It’s usually the last big tailgate of the year.

So let’s talk about the menu for the Thanksgiving tailgate. Why not serve all the good things from the Thursday dinner? Or, you could make a turkey soup for the people chilled by late November temperatures. The last couple of years for Thanksgiving weekend we have featured turkey soups, and the recipes are on our website at tailgatershandbook.com. This year we have a new bar recipe to go with any leftover items from Thursday’s feast. 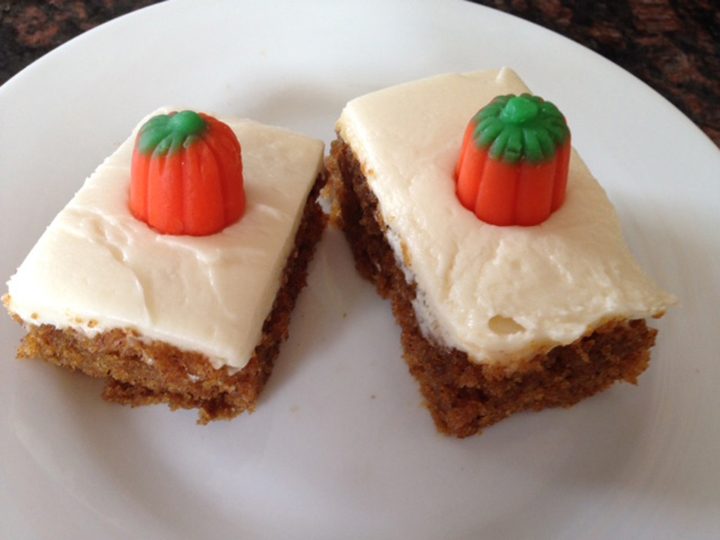 On the day before, preheat the oven to 350 degrees. Stir together in a large bowl flour, sugar, baking powder, cinnamon, baking soda, salt and cloves. Then stir in the eggs, pumpkin and oil.  Mix until well combined and then pour mixture into an ungreased 15”x10” baking pan and spread evenly. Bake 25-30 minutes until a toothpick, inserted, comes out clean. Cool the pan on a wire rack.

To finish the presentation, make the frosting by combining the cream cheese, butter and vanilla and beat with an electric mixer on medium speed until the mixture is light and fluffy. Then gradually add in 4 ½ to 5 cups powdered sugar and beat to make the mixture spreadable. Frost the cooled un-cut bars and then cut them into 36 pieces. Top the bars with candy pumpkins and cover with a lid or foil and refrigerate overnight.

On game day, take the bars to your tailgate in a cooler packed with ice.