You are at:Home»Current in Zionsville»Trump’s pick for Navy secretary has Zionsville ties 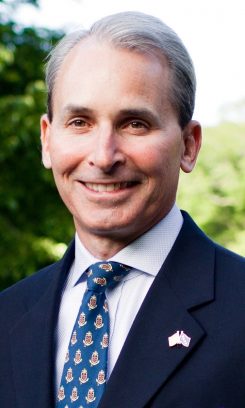 The next secretary of the Navy could be a Zionsville High School graduate.

President Donald Trump announced Jan. 25 that he plans to nominate Philip Bilden as the 76th Secretary of the Navy. Bilden graduated from ZHS in 1982.

“I am deeply humbled and honored to serve as Secretary of the Navy,” Bilden stated in a press release. “Maintaining the strength, readiness, and capabilities of our maritime force is critical to our national security. If confirmed, I will ensure that our Sailors and Marines have the resources they need to defend our interests around the globe and support our allies with commitment and capability.”

The Bilden family has strong military ties, with four consecutive generations serving as Army or Navy officers. His two sons are currently serving in the Navy.

He recently retired as a co-founding member and senior advisor of HarbourVest Partners, LLC, a global private equity investment management firm. He serves on several boards for non-profit organizations.

“As Secretary of the Navy, Philip Bilden will apply his terrific judgement and top-notch management skills to the task of rebuilding our unparalleled Navy,” Trump stated in a press release. “Our number of ships is at the lowest point that it has been in decades. Philip Bilden is the right choice to help us expand and modernize our fleet, including surface ships, submarines and aircraft, and ensure America’s naval supremacy for decades to come. I am proud of the men and women of our armed forces. The people who serve in our military are our American heroes, and we honor their service every day.”