Sophomore Chris Moe claims he is the best eSports athlete at Carmel High School, and he has the record to prove it. 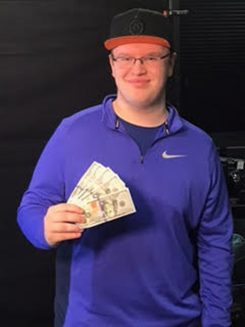 Chris Moe displays the prize he won at the Mad City GG Counter Strike Global Offensive Tournament in Chicago. As a semi-professional eSports athlete, Moe has set schedules, game times, try-outs and a signed contract, similar to a professional athlete.

Last month, Moe won the Mad City GG Counter Strike Global Offensive Tournament in Chicago. His team, Fragging for Ike, won $3,000 for taking the top spot in the tournament that was streamed live on Twitch to 5,000 viewers.

He said his parents support his career choice and encourage him to pursue his dreams. He wants to travel the world participating in eSports tournaments and invite his parents to join him in eSports competitions in locations like Sweden.

“I’ve always had a passion for the game,” Moe said. “I’ve found my niche, and this is what I want to do. This is my passion, my ambition.”