You are at:Home»Current in Carmel»Carmel Community»Column: It’s about the journey, not the speed

Last year, I ran the half marathon at the 2016 Carmel Marathon weekend. It was a great day. Wonderful weather. It was my birthday that day. And I finished with my best time yet — 2 hours and 8 minutes.

But what I’ll remember most from that day wasn’t my finishing time or how sore my legs were. It was a man who quietly finished the race more than an hour after me. 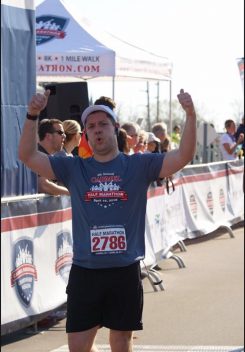 Adam Aasen competes in the 2016 Carmel half marathon. (Submitted photo)

After I finished my run, I sat on the curb and stretched my legs and wiped off the sweat. I refueled with one of the complimentary protein shakes and posted my time on Facebook, waiting for my fiance to finish her half marathon.

We walked around and she had a drink in the beer garden area, which had quite a long line. We walked back to our apartment, which was along City Center Drive just a few blocks from the starting line to take showers and rest.

It was a beautiful day, so we decided to walk to Divvy to sit outside for lunch. As we were walking along City Center, we saw people breaking down tables and loading equipment into trucks.

But there was one man — with a determined look on his face — pushing his way to the finish line.

My guess is he was the last one to finish the full marathon. I didn’t talk to him and I didn’t take his photo. I didn’t want to distract him or embarrass him, but I was really struck by him.

It had to be six or seven hours after the race started at 9 a.m. (I looked up results online and that seems right). We stood there and clapped for him to cheer him on. We wanted him to know we weren’t making fun of him in the least. On the contrary, it’s inspiring to see someone keep going and not give up. He might have been last, but he finished, and that puts him ahead of everyone who quit or didn’t even try.

It reminded me of the last-place finisher of the 2015 Boston Marathon. It was a Venezuelan man I read about who endured torrential downpours the last few miles to finish 20 hours after the race started. It was 5 a.m. when he crossed the finish line and he ran all night. He has a severe form of muscular dystrophy that impairs his mobility. Of course, this Carmel Marathon finisher didn’t take that long, but he had that similar drive to keep going and never give up.

My personal goal for the half marathon in 2017 is to run it in less than two hours. That means I need to average less than nine minutes per mile to have some time built in for water stops. It’s been tough. I’ve logged a lot of time on the treadmill, and maybe I over-trained, because I developed some severe tightness in my leg muscles and it’s been hard to stretch it out. I’m trying to rest and heal up but also build up my speed and strength, and it’s hard to do both. When I did the quarter marathon at the Sam Costa race at Northview Church, I ran an 8:45 pace, and my legs were on fire afterward. Need to fix that.

I don’t know if I’ll reach my goal April 22, but I know I won’t quit. Even if my legs are on fire and I’m exhausted and in pain, I’ll think of that guy who finished last and never gave up. He still finished.