You are at:Home»Current in Carmel»Carmel Community»Ted Allen’s Carmel mom to appear on ‘Chopped’ competition

Donna Adams was a bit concerned when she got the invitation to appear with her son, Ted Allen, on “Chopped.” 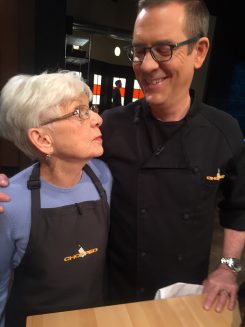 Allen has been the host of Food Network’s “Chopped” since 2009.

Adams, a long-time Carmel resident, is appearing with her son as he competes with other Food Network cooks Jeff Mauro, Jet Tila and Chris Santos and their mothers. The show, taped in February, will be televised at 10 p.m. May 9 as a Mother’s Day special.

“I thought I would be really nervous, but there wasn’t much time to be nervous,” Adams said. “Everyone was so nice. It turned out be easier than I thought, although it did take a long time. We were picked up at 5:45 in the morning and we finished at 7:30 that night.”

This was Adams’ first time to visit the “Chopped” studio in New York.

“I didn’t know what the kitchen looked like or anything,” Adams said. “I would have never done it by myself, but to do it with Ted would be fun. I’ve cooked with him at home before. and it’s always fun. I would relax if he was there.”

Ted’s sister, Lisa Martin, a Noblesville resident, went with Adams for the taping.

Adams said her family moved to Carmel in 1973. Her husband, Lowell Allen, died in 2008, and she later married Art Adams.

Allen, a 1983 Carmel High School graduate, got his start as a food and wine specialist on Bravo’s “Queer Eye for the Straight Guy” in 2003. The show’s name was changed to “Queer Eye” after the third season.

“I’m more into cooking now than I have been for years,” Adams said. “I’m enjoying cooking more now than I have in awhile. The only cooking Ted did when he was young was pizza.”

Adams said when her son wrote for “Chicago” magazine, he started to go along with the food critic.

“That’s where he learned to eat really high-quality food,” Adams said. “When he said he was trying out for a TV show, I sort of pooh-poohed it and thought no way that was going to happen. So when it did happen, I was totally shocked.”

Adams is going to watch the show with her brother, Jim Evans, and nephew, Tom, who has spina bifida, in Orlando.

“Every day Tom watches an episode or re-run of ‘Chopped.’ He loves his cousin Ted,” Adams said. “We had to compete for a charity, and I chose the Spina Bifida Association.”