You are at:Home»Current in Westfield»Westfield officials showcase school construction renderings at roundtable meeting, with superintendent, principals in attendance 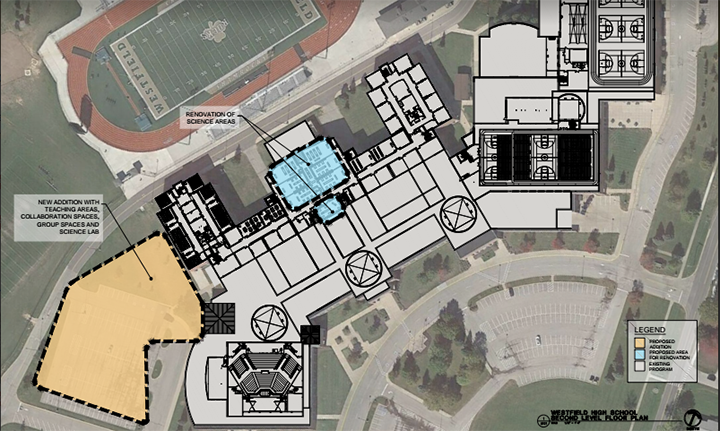 A rendering of science classroom expansions and a new addition at Westfield High School. (Submitted image)

Westfield Washington School officials presented new construction renderings and explained why they believe a $90 million referendum is needed for the school district. The roundtable meeting was held April 27. A special election for a construction referendum was scheduled for May 2.

The high school’s renovation and expansion is expected to top $42 million, while the middle and intermediate schools would generate a combined $23 million. Districtwide renovations will cost nearly $24 million. Superintendent Dr. Sherry Grate said districtwide funds would be allocated to “elementary schools first, then to maintenance of our buildings.”

“I had to build four additional walls, eight new tables were added, some closets turned into offices, the band had to be put in the LGI, but we made it work,” she said.

Patchett went on to say that she is “simply out of room for the kids.”

“Safety is (my) main concern. We would like to move the offices closer to the front entrance,” Westfield Middle School Principal Ryan Haughey said.

Haughey also noted the need for construction at the middle school, such as fixtures to the pool and expanding the arts.

“Forty-two percent of our kids are in some form of choir, band, or fine arts program,” he said.

A vital focus of the meeting was what learning will look like five to 10 years into the future. Westfield High School Principal Dr. Stacy McGuire said she currently has nine teachers without a classroom McGuire said that when planning the new renderings, she took into account students first.

“We want all (of our) students to be life ready, not all careers require a college degree,” she said.

Construction could start as early as the summer of 2018 with full completion in the summer of 2020. According to an estimate in a recent demographic study, student population at Westfield is expected to peak sometime in 2021 before edging off by the late 2020s.

Director of Business and Operations Nick Verhoff and architects also were on hand to answer questions.