You are at:Home»Current in Carmel»Carmel Business Local»Culture of Good spreads ideas for operating business with the ‘soul of a nonprofit’ 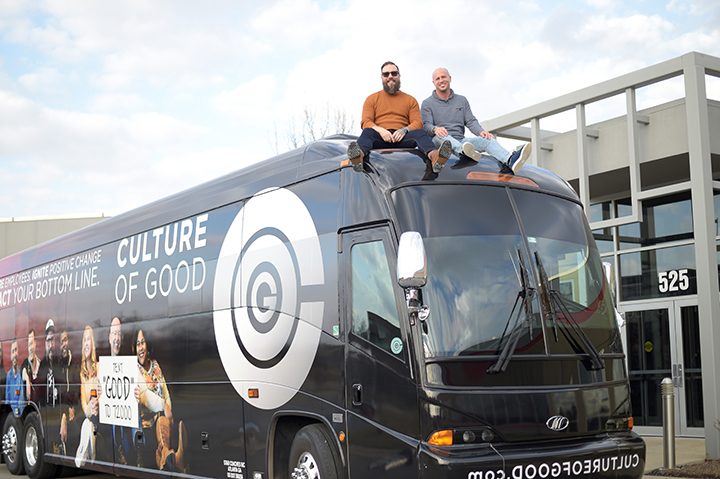 Ryan McCarty has been on an unusual bus journey around the nation.

The bus, called The Good Bus, made a stop to promote Culture of Good at Carmel-based Round Room headquarters, formerly called Moorehead Communications. McCarty and Carmel resident Scott Moorehead co-founded Culture of Good. Moorehead is the CEO of Round Room, TCC, Wireless Zone and Redux.

“We started Culture of Good four years ago as a movement within TCC, the largest Verizon retailer in the country, and now it’s its own entity,” said McCarty, who lives in downtown Indianapolis. “We teach for-profit companies how to operate their business with the soul of a nonprofit. They give their employees permission to care at work, connect to a greater cause and a greater purpose in the world, and that drives the company to greater success. And because of that, they give back more and do greater good.” 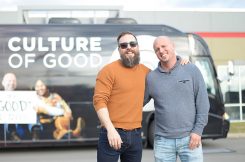 From left, Ryan McCarty and Scott Moorehead pause in front of The Good Bus. (Submitted photo)

During the bus trip, McCarty worked with TCC store employees to give out school supplies to teachers. McCarty visited business to share the Culture of Good concept. Moorehead has joined McCarty at some stops.

“The employees jump on the bus with us, and we drive to a school and go classroom-to-classroom dropping off supplies,” McCarty said. “We’re trying to raise awareness that teachers use $500 out of their own pocket each year for supplies. Everything you can think of, like a box of tissues, dry erase markers. The stores in each city partnered with the school.”

Moorehead said Culture of Good was a concept that was powerful enough to share.

The two wrote a book called “Build a Culture of Good,” which was published in January.

“We shared the book with many people who are influential, and they loved what we were doing,” Moorehead said. “That was our motivation to get started, realizing that this is worth our time to try and share this and implement this into as many businesses as will take it. It’s good for customers, their employees and their business. It’s a powerful concept if implemented appropriately.”

Moorehead said there is a whole portfolio of products to help companies implement Culture of Good.

“There are webinars, training and video series,” Moorehead said. “It’s an accumulation of things we’ve done here over time. It’s not like we just did this over a few weeks and decided to go all out. It’s a lot of failing and trials and tribulations.”

The three-month bus trip started in the Pacific Northwest and went to both coasts. It ended at South by Southwest in March in Austin, Texas.