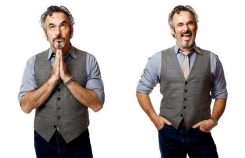 David Feherty performs at 7:30 p.m. June 2 at the Palladium in Carmel.  (Submitted photo)

Dave Feherty is not your typical golf reporter.

Known for his sense of humor and his off-beat antics, Feherty, who has a self-titled Golf Channel show, has interviewed former presidents Bill Clinton, George W. Bush and Barack Obama. He also interviewed Donald Trump before he took office.

“It’s been unbelievable,” Feherty said. “It’s so much fun to do over the last seven years. It’s not like work.”

Feherty will perform at 7:30 p.m. June 2 at the Palladium in Carmel.

“It’s a mixture of jokes, anecdotes and my stories from a lifetime in golf,” Feherty said. “But it’s not all about golf, it’s probably 50 percent.”

Feherty, who said he is less politically correct than he is on TV, said some stories are about “growing up in Northern Ireland with an idiot family,’ so there are a lot of Irish jokes. Feherty is brutally honest about battling his own demons.

“I try not to suffer from depression or alcoholism, I try to live with it,” said Feherty, who has been sober since 2005. “You have to maintain your sense of humor through it, that’s been an enormous help for me.”

Feherty, 58, is a former PGA Tour and European Tour competitor. After retiring, he began working as an on-course reporter for CBS. In 2016, he moved to NBC Sports’ golf coverage. “I tell other people’s stories as well unapologetically because if I don’t tell them, they’re going to die,” Feherty said. “(The stories) are from men like Ken Venturi and Arnold Palmer, Lee Trevino and (Seve) Ballesteros.”

He also has an interview series on Golf Channel since 2011.

“The greatest winner in the history of American sports, grew up in segregation, but doesn’t have a race card in his deck,” Feherty said. “The most gracious and dignified I’ve ever met. When I shook hands with him, there was a warmth and electricity he had that I’ve only felt a couple times in my life. When I shook hands with Arnold Palmer  and with Nelson Mandela (who he met in South Africa), it was the same way.”

One person Feherty hasn’t interviewed for his show is Tiger Woods.

“I don’t want the interview we see in press conferences with Tiger,” Feherty said. “I waited a long time to get Phil (Mickelson) and it was phenomenal. We had to do it over two episodes. I want Tiger to be comfortable. I don’t have victims on my show. I have guests. When Clinton was on, I didn’t ask him any Monica Lewinsky questions, we’ve covered that.”

Another guest he would like on his couch is Bill Murray.

“‘(‘Caddyshack’ ) lampooned everything I dislike about the game, the elitist, country club life,” Feherty said. “It made the game seem more fun and very accessible to a whole bunch of people.”