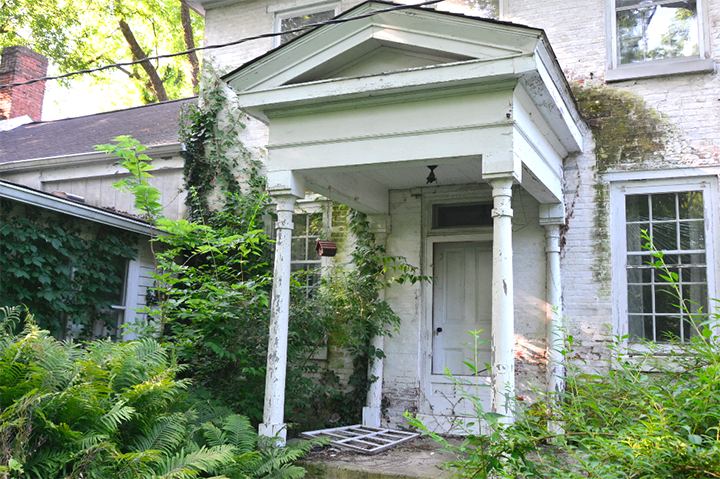 Indiana Landmarks and the Carmel Historic Preservation Commission are working to create a plan to save a home built in 1834 on Carmel’s east side. (Photo by Jennifer Hershberger)

When Beazer Homes Indiana proposed a new subdivision in northeast Carmel for empty nester homes, it came as a surprise to some that a historic home built in 1834 was on the land. That’s because the structure, built by the Moffitt family, was not listed on the Carmel Historic Preservation Commission’s list of historic homes in the city.

City Council President Sue Finkam, who represents the district where the proposed development is located, asked CHPC member Sam Burgess how this occurred.

“I think a lot of us were surprised when out of the blue we get letters about the Hull House when those of us on the council spent a ton of time along with the historic preservation commission identifying historic properties,” she said. “I believe (there are) 500 on the initial list,  and suddenly this house comes forward and no one had discussed it. There were some comments made that it was because it was not visible from the road. Can you walk me through how this happened, and are there other houses we’re not aware of?”

Burgess explained that the home at 2724 E. 136th St. meets the requirements for a historic home worthy of preservation but that it was “initially missed” because it was not visible from the street at the time of the survey. He said it’s not a necessity that homes be visible to many people for it to be considered, and Beazer Homes is discussing a proposal with Indiana Landmarks and the CHPC to preserve the home. It’s possible that a deal won’t be reached, but historic preservationists are exploring the idea.

“There are several properties we are considering adding to the list that were initially missed,” he said. “The commission is interested in doing an annual inventory to make sure initial properties aren’t missed.”