You are at:Home»Current in Zionsville»World War II veteran remembered through display at Zionsville Community High School 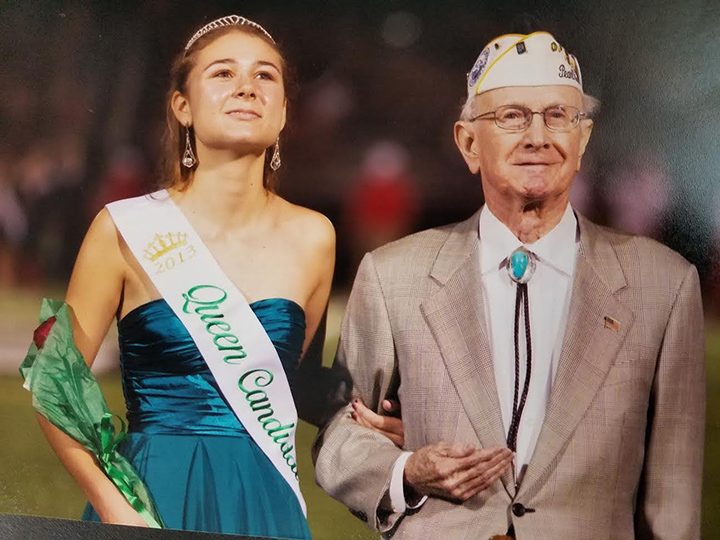 A World War II veteran and Indiana native is being remembered in the halls of Zionsville Community High School.

For his Eagle Scout project, ZCHS senior, life scout and member of Boy Scout Troop 358 Jake Strachan decided to display items donated by Harley Guynn, a World War II veteran and gunner’s mate on the USS Maryland, which was hit by two bombs during the Japanese attack on Pearl Harbor in 1941.

The display case includes a portion of the memorabilia Guynn donated to the school,  including a piece of the USS Maryland deck, a replica of the ship’s bell and the shorts Guynn wore on the morning of the attack on Pearl Harbor.

David Rodgers, a ZCHS history and government teacher, met Guynn when he spoke to ZCHS students in 2006 during an Indy Honor Flight in 2008. The two met again in 2013 when Guynn was asked to be the escort for the homecoming queen.

Rodgers said during Guynn’s presentations to the students, he emphasized that he was just a kid from Indiana, barely older than the students of ZCHS when he went to war at age 19. Guynn died last year at 91.

“It was important to him that succeeding generations not forget what his generation went through, and that we as a country remain vigilant and prepared,” Rodgers said. “But also important that these generations knew that they, too, could rise to any challenges they might face.”

Strachan said the goal of the case is to encourage students to honor veterans when they see it.

“It’s so easy to read books and watch movies and find yourself distanced from the reality,” Strachan said. “These artifacts help remind you that real people, like Mr. Guynn, went through real battles, like Pearl Harbor.”

Strachan raised $1,000 through a GoFundMe project. Strachan said $800 of the funds were used for the display, and the remaining $200 will be donated to the American Legion.

“Not many schools have this type of personal history accessible to their students,” Rodgers said. “His connection to Zionsville will be impacting students and others who visit ZCHS long after I am no longer here to tell his story. That’s a powerful tool for maintaining our collective memory.”