After months of discussion, the Carmel City Council on Sept. 18 approved $96 million in bonds that will pay for a city-owned boutique hotel, new roundabouts and multi-use paths but does not include funding for an antique carousel originally proposed in the bond package. 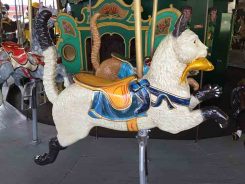 The City of Carmel is looking into purchasing an antique carousel that features several hand-carved animals, including cats. (Submitted photo)

The city is paying $10 million to lure a four-star Autograph Collection by Marriott hotel that the city would co-own with Pedcor Companies. The Carmel Redevelopment Commission will help pay nearly $40 million in construction costs and back up the mortgage loan payments.

Councilor Jeff Worrell, who voted in support of the hotel but not the carousel, said that in addition to attracting guests from out of town, the hotel will be a valuable amenity for Carmel residents.

“A large number of users will come from the Carmel ZIP codes and will never press the up button on the elevator past the second floor,” he said. “Can this hotel become an adult gathering place? A place to connect with friends? A place to see your neighbors and associates in an atmosphere unlike anywhere else in the city?”

Councilors Tony Green and Laura Campbell expressed concerns about the hotel, which is planned to include a fine dining restaurant and nightclub, and voted against funding it. Green said he didn’t think Carmel should guarantee the hotel debt “from now until perpetuity.”

“We’re jumping in with two feet to ownership. We’re jumping in to the market,” he said. “As a matter of policy that’s generally not the way government should be operating.”

Campbell said she did not support the city competing with private hotels.

“Even though this is a different (type of) hotel, that’s something I really struggle with,” she said. “I don’t think we should compete with other businesses, not only for customers but for employees.”

Councilor Ron Carter spoke in favor of the hotel and urged the council to keep funding for the carousel in the bonds.

“I believe that communities always have to move forward or they die over time,” he said.

Councilor Bruce Kimball joined Carter in supporting the carousel, but they did not have the votes to override a motion to remove it.

Even though the Carmel City Council stripped funding for a 1907 hand-carved Dentzel carousel from the bond package it approved, Mayor Jim Brainard has said he hopes to find another way to bring it to the city.

“The Centreville carousel is one of only a handful of Dentzel Menagerie Carousels left in the world and the only one left in Canada,” the petition states. “This hand-carved antique carousel with its pigs, ostriches, cats and rabbits has delighted thousands of children for over half a century and is an important part of Toronto Island which is the number one destination park for tourists in our city. I hope City Council will agree to preserve this heritage asset in our city so it can continue to bring joy to future generations.”

The Toronto park saw $8 million in lost revenue because of flood-related damages in 2017 and decided to sell the carousel to soften the blow from financial losses. But that plan has drawn criticism from many people who would like to see it stay in Toronto.