You are at:Home»Current in Zionsville»Zionsville Community»Ivy Tech names Zionsville couple as Benefactors of the Year

A Zionsville couple was recently recognized by the Ivy Tech Foundation as Benefactors of the Year for Central Indiana. 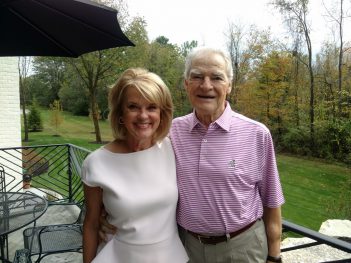 Cheri and Rollie Dick of Zionsville were recently named Ivy Tech’s Benefactors of the Year for Central Indiana. (photo by Heather Lusk)

Rollie and Cheri Dick earned the honor after funding half of the expansion of the school’s Associate Accelerated Program, which allows students to receive an associate’s degree in roughly one year instead of two. Through the program, students receive a stipend to cover some living expenses, allowing them to concentrate on schoolwork instead of earning money.

“I think so often the challenges of getting a degree are insurmountable,” Cheri Dick said. “You have to work, you may have children, you may have other pressed demands.”

“I’ve had a passion for education for many years,” Rollie Dick said. “I think education is key to the survival of our city and our civilizations.”

The couple appreciates that the school offers a variety of educational opportunities for those who seek a degree and for those who simply want to add to their knowledge base.

“We love Ivy Tech and what it does for people,” Cheri Dick said. “We all have different skill sets.”

The couple also established the Robert Longardner Scholarship for pre-architecture students at Ivy Tech. The scholarship was named after Cheri Dick’s father, who built the Stouffer’s Hotel, now home to the Ivy Tech Culinary Center, on North Meridian Street in Indianapolis. She noted that her father was particularly proud of the floor where the culinary school is now housed.

The couple have donated to causes throughout the city, supporting various educational, cultural and health organizations.

“I will enjoy Indianapolis better if it has a good symphony, a good IRT and a good hospital,” Rollie Dick said. “On the one hand, it’s philanthropic, and on the other hand, it’s enlightened self-interest.”