You are at:Home»Current in Zionsville»Zionsville Community»Community responds to sudden death of Zionsville Little League coach 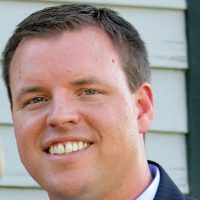 “He was 6-6, but he was really a teddy bear,” said Steve St. John, a longtime friend. “He had an infectious smile. He gave you the biggest hugs. If you hadn’t seen Streck and you hadn’t seen him for several months, it would take you five seconds to get up with his life. When you talked with Streck, he made you feel like you are the most important person in his life at that moment.”

Strecker died unexpectedly at age 42 Nov. 22 at his Zionsville home. He leaves behind his wife, Lisa Richter, and three daughters, Isabella 13, Campbell 10, Elliana, 9 and son, Grayson, 7.

A group of 18 former Kalamazoo College friends and players gathered the night before the Nov. 29 funeral. 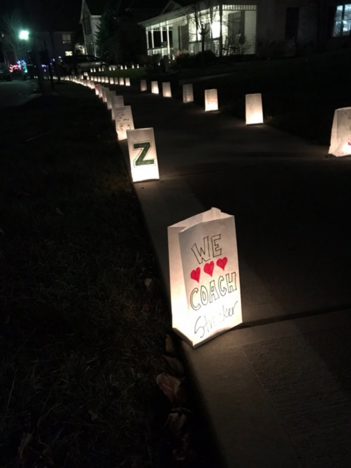 Neighbors in Stonegate lined the street with more than 400 luminaries in honor of Steve Strecker to welcome his family as they returned from the visitation. (Submitted photo)

“We couldn’t remember one time when Streck was ever mad anybody,” St. John said. “He was always someone who wanted to rectify and remedy any situation.”

St. John explained when Strecker’s wife took a job in Indianapolis, he moved a mile away from St. John in Zionsville.

“I had my buddy back living a mile down the street,” St. John said.

“He was passionate through and through,” Rinebold said. “He cared for not only his girls’ well-being but the others.”

Strecker served as a coach and on the board of Zionsville Little League.

“He was a tremendous asset,” Rinebold said. “He was someone you could always count on and count on to do the right thing. He coached a Major League team that went to the state finals. I can’t say enough good things about the guy.”

“For all the right reasons, he got involved,” Rinebold said. “He was passionate about youth sports, and softball, in particular.”

Melanie Green said she was fortunate her daughter, Alexa, was coached by Strecker.

“We are one of the many families who were blessed to have called Steve coach,” Green said. “He has left a forever impression on our young daughter as well as hundreds of softball players and other youth through his work as a soccer and basketball coach. His reach and impact will far extend his life on this earth. He inspired everyone to ‘be your best you’ and lived that himself daily.”