Dan Mader has devoted his career as an architect to education facilities.

That didn’t go unnoticed when the longtime Carmel resident received the 2017 Lifetime Achievement Award from Association for Learning Environments Oct. 28 in LearningSCAPES Awards General Session in Atlanta. Mader, 63, retired as Fanning Howey chairman of the board at the end of 2017. Mader, an American Institute of Architects member, left his position as CEO in 2014. 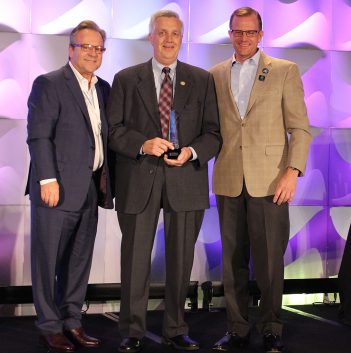 The Lifetime Achievement Award honors individuals who make significant, lasting contributions to the educational facility planning industry throughout their careers.

“Dan Mader exemplifies Fanning Howey’s commitment to raising the bar for the planning and design of learning environments,” Fanning Howey Chief Executive Officer William Payne, AIA, stated in a news release. “He has devoted countless hours to A4LE and has been a passionate leader within the organization and a dedicated advocate of improving the lives of students through educational facilities.”

Mader started his career at Fanning Howey in Ohio after graduating from Notre Dame in 1977.

He left Fanning Howey in 1983 to take a job with Browning Day Mullins Dierdorf, which had just gotten a contract to do a major renovation on Broad Ripple High School. Mader was brought in to be the project manager.

He came back to Fanning Howey in Indianapolis in 1988.

“I’ve been doing exclusively school projects since then,” Mader said. “Dealing with education, in my mind, is a higher calling just because of the impact you have on so many lives. Some people say, ‘Isn’t it repetitious doing school buildings all the time?’  When we are doing school buildings, we are designing restaurants, libraries, entertainment facilities, athletic facilities, office buildings and classrooms every time we do a school.”

Mader said the biggest change has been the rate of change.

“Back in the ‘70s and ’80s, you thought you knew where education was going and it didn’t take very much to be out on the cutting edge,” Mader said. “Flash forward to today, the way education is being delivered is more varied and changing more rapidly. The demand for flexibility in buildings is exponentially higher than it ever has been in the past. That’s not just in the United States.”

His first school when he came back to Fanning Howey in 1988 was New Britton Elementary School in Fishers.

Although Mader will miss the people, he is eager for retirement.

“I’m wondering if I have time for all the things I have lined up to do,” Mader said.  “I’m an avid golfer and an avid traveler. The first thing on our list is a European river cruise.”

Mader will continue to keep Guerin Catholic High School, which is raising building funds, as a client.

His wife, Joie, is a retired Carmel Clay Schools art teacher. Their son Christopher, 34, is a Carmel High School graduate and a cancer research scientist in Boston.

Mader, who has served in regional and national leadership roles for the A4LE, also is on the board of directors of Schools for Children of the World and is chairman of the Legislative Committee for the Indiana chapter of the AIA.