You are at:Home»Current in Zionsville»Zionsville Community»Fairy gardens maintain magic in winter

They are tiny houses not occupied by people. The residents are never seen, at least not by the homes’ creator, Anne Gill. 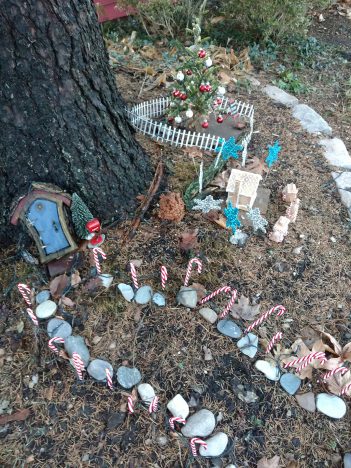 Fairy gardens are more than a summer hobby in Zionsville. (photo by Heather Lusk)

“Maybe the kids see them,” Gill said with a laugh. “Maybe out of the corner of your eye you might see them occasionally.”

Gill’s fairy garden, which contains the tiny houses, is among dozens around Zionsville. With Christmas trees, candy canes and evidence that a small Santa and elves have visited, Gill’s garden has become a popular year-round attraction in front of her Main Street home.

The garden began with a fairy door that didn’t seem to fit any trees at her previous residence. After moving to Zionsville five years ago she discovered that her front yard’s Norwegian Pine, almost as old as the 19th century house, was the perfect match for the door.

Not only is the garden decorated for the winter, Gill adds a Ferris wheel for Fall Festival weekend and Halloween decorations in October. In the spring, live miniature hostas and daffodils occasionally sprout around the small homes.

“We get a big kick out of people enjoying it,” Gill said.

Nine-year-old Clara Carlson created a fairy garden in her yard after reading a book about fairies lacking adequate housing in winter months. She has handmade many of the accessories and modifies some elements for the cold weather, such as a lemonade stand that becomes a hot chocolate stand.

Clara maintains the garden year-round and enjoys tending to it and rearranging it.

“If you don’t look at it for a long time in the fall, it gets covered with leaves,” she said.

Clara utilizes moss, pebbles and outdoor plants to decorate the garden and create elements like a pond and small salads for the fairies to enjoy.