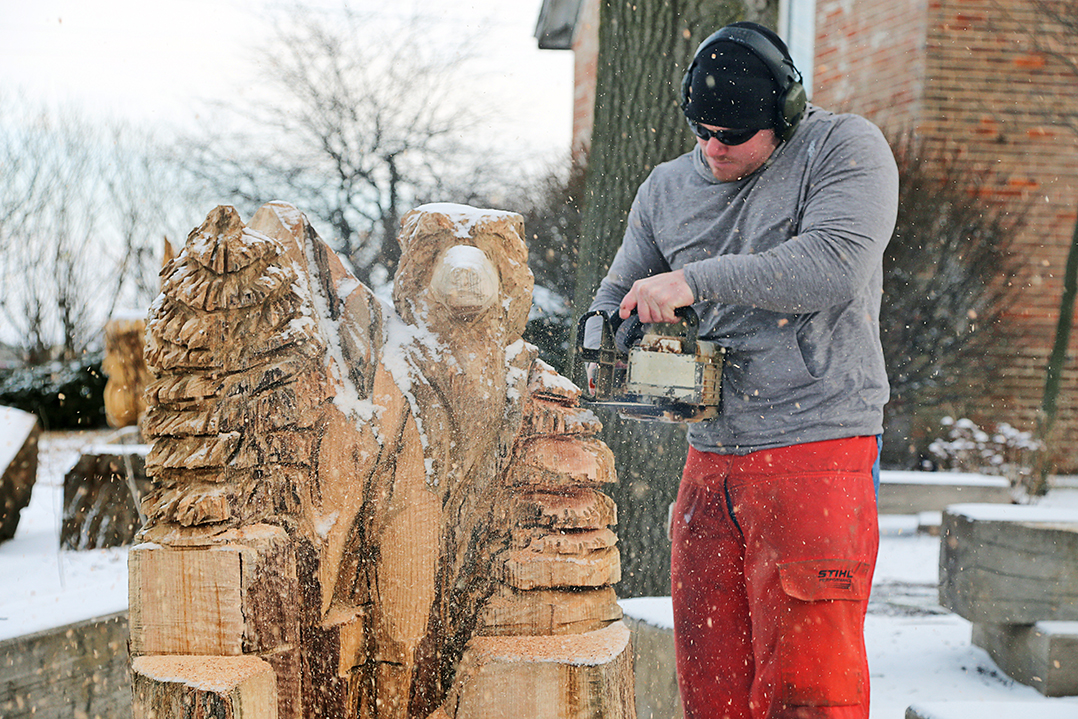 The discovery of a Native American artifact in Carmel renewed Marshall Gaw’s interest in Indian culture and his love of carving.

The 30-year-old Carmel resident took out his chainsaw and began creating an Indian head, titled “Tribute to Native Americans,” after learning of the banner stone, a multi-tool used by native settlers possibly 4,000 years ago. A city employee found the artifact in June 2017 at the 136th Street and Gray Road roundabout construction site.

Gaw works as an arborist at Vine & Branch on 146th Street, where some of his work is on display outside the building. He can often be seen in the yard with his chainsaw working on custom-made pieces.

“I’ll take that hunk of wood and just use my imagination,” Gaw said.

A change of pace

As a child, Gaw enjoyed playing with toys such as Play-Doh and Legos. His interest in carving and clay sculpting took root in high school. A 2006 Westfield High School graduate, he said he would finish his high school projects as quickly as he could so that he could begin working on his own imaginative creations, including a gorilla with bat wings.

In 2007, Gaw sold all of his belongings except for a backpack of personal items, flew to Colorado and trekked seven miles to Manitou Springs in search of a change of pace. While there, he completed an apprenticeship at Nature of Things Chainsaw Art.

The first piece Gaw sold was an oil-based clay sculpture of an Indian face in Colorado. Gaw said when the purchaser walked into the store, his eyes filled with tears as explaind the sculpture looked just like his deceased father-in-law.

In September 2016, Gaw’s work was featured at Indiana Originals, a marketplace for local products, artisans and businesses.

Fishers resident Terry Crowder heard about Gaw’s work during an Indiana Originals radio interview. Crowder contacted Vine & Branch to order a custom elephant sculpture with a raised trunk for his wife. Crowder said his wife, Joyce, collects elephants, and the custom-made 80-pound chainsaw carving is their biggest piece. Crowder surprised his wife with the carving on Christmas Day.

“She was delighted with it,” Crowder said. “She couldn’t believe she had that huge elephant wood carving.”

Recently, an anonymous donor purchased a 10-foot, 8,000-pound couch that Gaw carved and gave to the Indiana Museum of Art. The red oak couch is outside in the Virginia Fairbanks Art and Nature Park in Indianapolis.

Gaw said he admires the Renaissance-era artists and contemporary sculptors such as Alex Oliver and Jose Ismael Fernandez. He believes his talents are a gift from God.

“I am only able to do things I can do because God, and God alone, has blessed me with these abilities,” Gaw said. “So, I owe a lot of my talent and achievements to the big guy.” 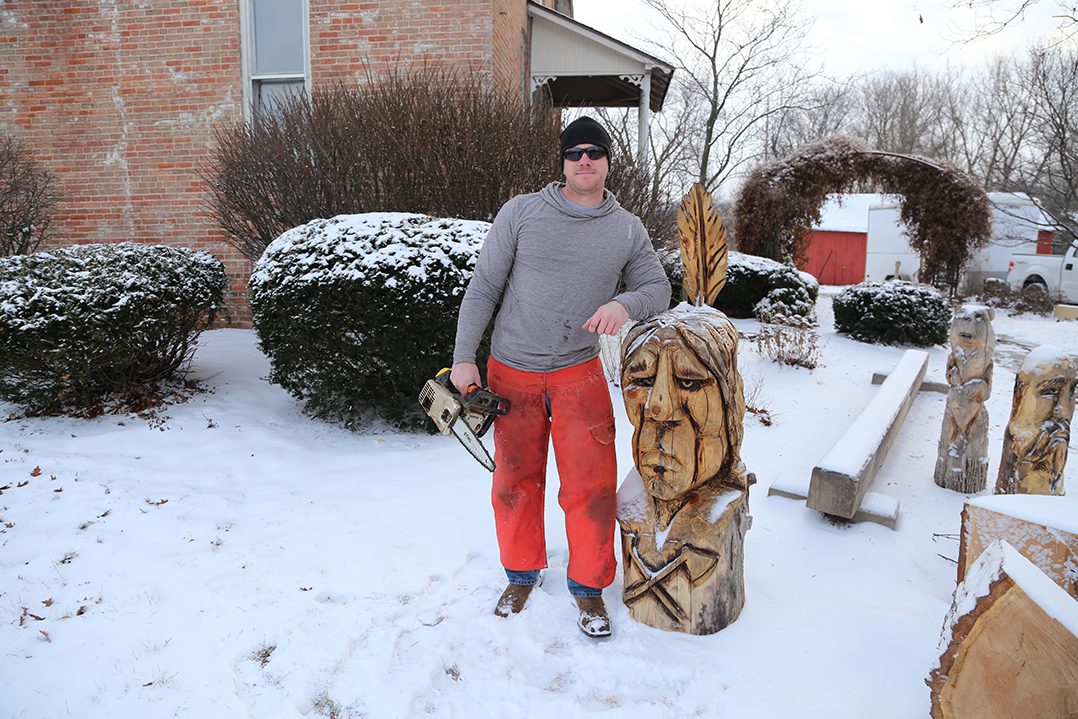 Marshall Gaw pauses with his sculpture called Tribute to “Native Americans,” which rests on the Vine & Branch property in Carmel. (Photo by Ann Marie Shambaugh)

Gaw, a scout sniper in the Army National Guard, begins each chainsaw carving by selecting the right size and piece of wood. He uses a blocking method to form the general shape of the carving and then uses an angle grinder with a sanding pad attachment and dremel tool to bring the piece to life and etch the details.

Gaw said he likes to finalize carvings with a coat of polyurethane to weather-proof the piece and bring out the natural color and grain of the wood.

Because of the dangers of chainsaw carving, Gaw said he always wears the appropriate safety equipment, including chaps, gloves, a mask apparatus and cowboy boots so that sawdust doesn’t get stuck between his boot laces.

Gaw said he takes his gloves off periodically to feel the artwork with his bare skin.

“I’m pouring my heart into this, and I want to touch and feel it,” he said.

Gaw recommends beginners start with a piece of log-shaped clay to get a feel for carving, but he notes that with wood carving, pieces can’t be put back on once removed.

For information or to order a custom piece, call 317-846-3778 or visit vineandbranchfurniture.com. 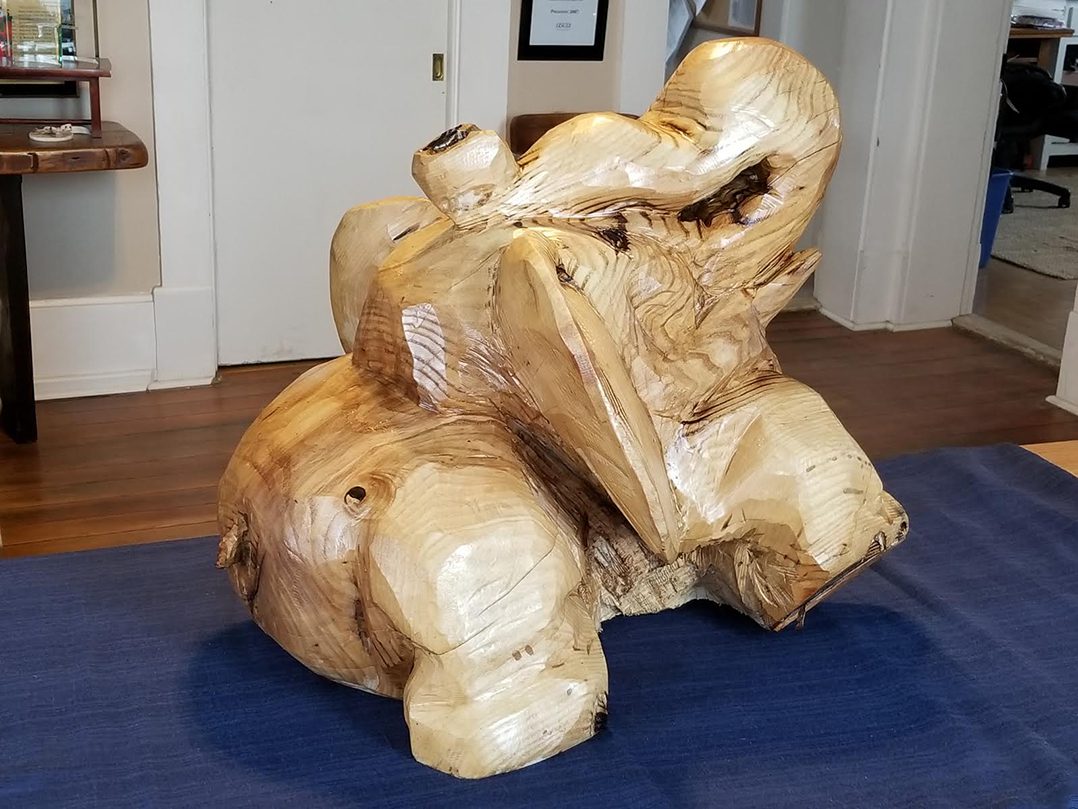 Marshall Gaw obtains the wood for his carvings through his work at Vine & Branch and repurposes it. He’s created bears, a wolf chair, a rocking horse, furniture and more.

Gaw’s carvings align with Vine & Branch’s mission to reuse and repurpose wood. The Vine & Branch office is filled with desks and furniture made from local wood. Vine & Branch donates chips for local parks for trails throughout the community.

“We like to take trees and turn them into heirloom furniture,” said Jud Scott, Vine & Branch owner.