March is Music in Our Schools Month, a national celebration of programs that promote the benefits of high-quality music education in the U.S. 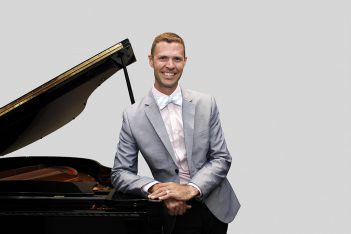 In central Indiana, few organizations embody the spirit of high-quality music education quite like the Indianapolis Children’s Choir, a choral musical program which serves about 5,500 young people in nearly 20 Indiana counties — including Hamilton County, where more than 130 students participate at their respective schools.

Carmel resident Joshua Pedde, who is in his second year as the ICC’s artistic director, describes the organization’s programming as something above and beyond traditional singing lessons.

“There’s so much more than just what’s really on the surface. This is a great music education,” said Pedde, who has been with the ICC for 17 years. “(There’s) learning how to read music, sing music, proper technique and all of that, but there’s so much more.  It’s about working as a community, being part of something bigger than yourself, learning teamwork, learning responsibility and respect for one another.

“They’re going to be working with kids that they might not normally meet on a day-to-day basis, and it broadens their horizons.”

Founded in 1986 and headquartered at Butler University, the ICC’s purpose, according to its mission statement, is to inspire and nurture “student achievement through quality music education and the pursuit of artistic excellence in choral music performance.”

To fulfill its mission, the ICC has established music education programs for kids 18 months to 18 years old in more than 359 schools in 56 school districts in central Indiana. In total, it conducts 110 rehearsals and music classes each week.

Of the participating Hamilton County school districts, Carmel Clay Schools is the largest — and one of central Indiana’s largest — with 57 students enrolled in ICC-sponsored music programs. Hamilton Southeastern Schools has 44 students, followed by Noblesville Schools with 17 and Westfield Washington Schools with nine. Zionsville Community Schools also has nine.

The ICC regularly performs concerts throughout the year at such venues as Clowes Memorial Hall and Hilbert Circle Theatre and appears with orchestras, professional artists and high-caliber ensembles.

All ICC singers are enrolled in ICC-sponsored music programs at their respective schools.

“That’s part of our requirements to be in the program, because we feel what we do benefits what the teachers are doing and helps support what they’re doing,” Pedde said. “The Indianapolis Children’s Choir also offers free support to all of our area teachers, so we go out and we do workshops and school visits and convocations for all our area music teachers as a way to give back to them and support them for the wonderful work they’re doing.”