Beef & Boards Dinner Theatre owner Doug Stark has directed several productions of “Singin’ in the Rain,” but this will be his first time performing in the musical.

“I wanted to make sure I was the proper age and had the proper amount of hair loss,” Stark said. 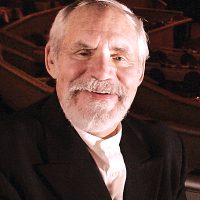 The Zionsville resident will play R.F. Simpson in the Beef & Boards production, which runs April 12 through May 26.

This will be the sixth production of the perennial favorite at Beef & Boards, Stark said.

“It’s ‘La La Land,’ only older,” Stark said. “Audiences love the universal appeal. Its songs take you back to a gentler time. The dances are great. The conflict is not life-shattering, and in the end, the boy gets the girl and the girl gets the boy. The nasty star gets embarrassed and the producer has a hit. What could be better?”

“Of course, with the need for rain to fall on the stage, keeping the parts dry that aren’t supposed to get wet can be a challenge,” Stark said. “That, and not running out of warm water.”

Stark said he usually appears in two or three shows a season.

“This year, in addition to ‘Singin’ in the Rain,’ I will be Santa in ‘Elf,’ again because I have the beard and the belly,” Stark said of the production set for Nov. 23 to Dec. 31.