Some dream of the chance to sing on The Palladium stage in Carmel. 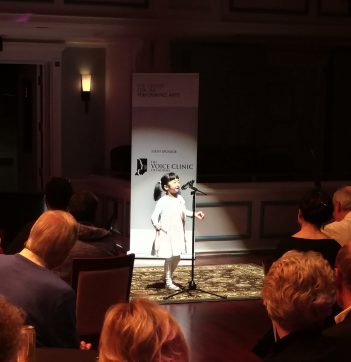 Thanks to an idea by The Voice Clinic of Indiana, that dream can come true for anyone.

“It’s been very successful,” said Julia Shildmyer-Heighway, the Center for the Performing Arts director of education and community engagement. “We’ve probably had 30 singers each time we’ve had it. Our youngest has been 6 years old when she started, and she has done it every year, and her name is Yaya (Wang). The second year she accompanied herself on the Steinway piano. Our oldest singers have been in their 80s. They come from all over the Indianapolis area. We have an incredible accompanist, Sean Baker, who has worked the event every single year.” 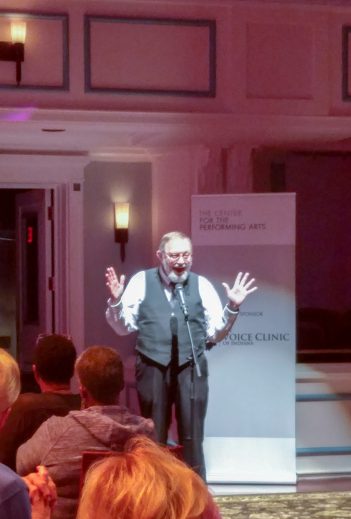 Shildmyer-Heighway said people bring their own sheet music and sign in. They are called up to sing in the order of the sign-in sheet, like a karaoke bar.

“Some people accompany themselves on ukelele or guitar,” she said. “Other people bring music on MP3 players or an iPhone, and we have the ability to plug that into our sound system. We’ve had duets and trios.”

Doors open at 6 p.m. The event runs from 6:30 to 8:30 p.m. Due to time constraints, participation is limited to the first 30 to sign up. Songs are limited to 3 minutes. The event is free to participants and spectators.

“You don’t even have to know anyone who is singing, you can just come and enjoy the evening,” Shildmyer-Heighway said. “We’ve had jazz and opera singers and a lot of show tunes. Some of the younger people sing pop music.”

Some of the singers come from the Center’s Group Vocal Coaching Class, which is held for four weeks.

The stage is set like a cabaret night club and people sit at tables. There is a bar on stage. 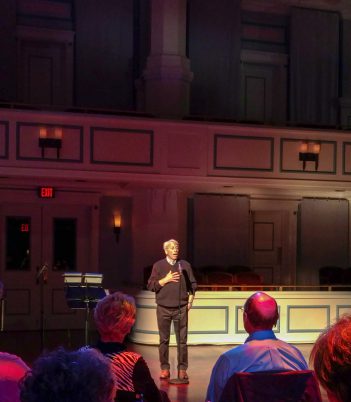 The Voice Clinic of Indiana, based in Carmel, sponsors the World Voice Day vocal class. The clinic opened four years ago to provide clinical care, medical care, surgical care and voice therapy for people with any and every type of voice disorder and throat problem.

“It was a top priority for us to partner with the Center for the Performing Arts not only because of their phenomenal reputation but because they display the essence of voice in such a variety of ways,” said Dr. Stacey Halum, from The Voice Clinic of Indiana. “They consistently attract globally acclaimed performers, such as Sheryl Crow (in 2017) and comedians like Dennis Miller (coming in May), and most of their performers use their voice in a unique way to connect with the audience. From soul singing to operatic masterpieces to just using comedic spoken voice to get belly laughs, the performers bring us entertainment that often relies on ‘voice’ as the foundation.”

Halum said they wanted World Voice Day to be a true celebration of voice.

“There is no better way to unite in the celebration of voice than to come together as a community and sing, with each singer being able to perform in his or her own way,” Halum said. “World Voice Day is about appreciating healthy voices, and we were thrilled to partner with the Center for the Performing Arts so that performers of all levels, ages and backgrounds can enjoy the thrill of using their voices to performing on stage at The Palladium. I can’t imagine a better way to celebrate.”