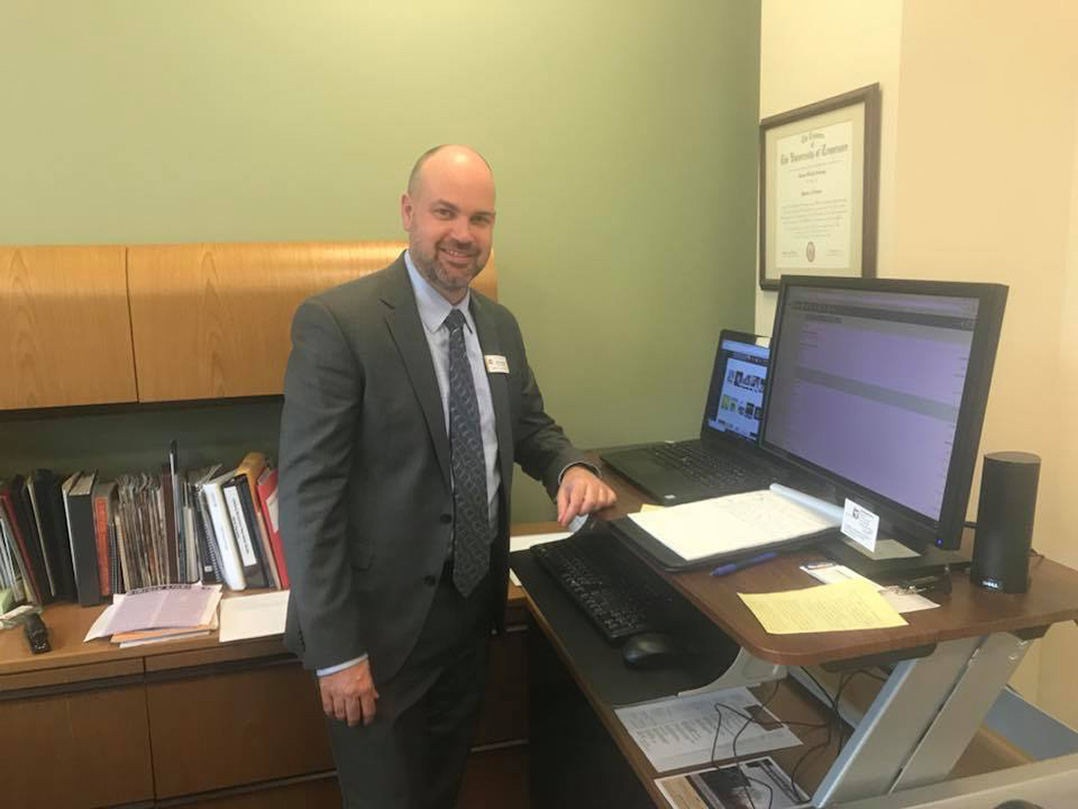 CCPL Director Bob Swanay said an expansion of the building could better serve a population that has doubled since the library was built. (Photo by Adam Aasen)

When it was built, Carmel had a population of about 46,000, according to the U.S. Census. In nearly 20 years, Carmel’s population has doubled, which is one of the reasons that Library Director Bob Swanay said an expansion is being considered.

“When the library was built, it was a tremendous building, but it really was only big enough for a community of that size,” he said.

The library’s board of directors has developed a vision for the future based on surveys, data and public input. They are now holding meetings to inform the public before further steps are taken.

Swanay said no tax increase is needed to fund the project and that not all aspects of the vision will be under construction at the same time. The vision includes renovating current spaces to maximize usage, building an addition and configuring more parking, which likely means a garage to maximize space. They’re also exploring a new branch in West Carmel.

Here are other reasons the expansion is needed, according to officials:

Swanay said people always assume libraries are dying, but he said that isn’t true. Not only does the Carmel Clay Public Library offer a lot more than just books for check out — there are E-books, events/programs and study spaces — but many people still want hard copies.

“If you look at the numbers, you’d expect based on our population you’d see half that usage,” he said. “So, we have incredible numbers. Every number you look at, the library is heavily used in Carmel.”

One area that would be substantially increased is program room spaces. The public can reserve a room — the largest of which seats approximately 100 people — for events such as seminars, political meetings and more. Because there’s so little space, there aren’t many openings on the schedule, and often the rooms are already booked for events organized by the library.

Swanay said it was forward-thinking for the library to design a teen area in the 1990s, but now the 2,500 square feet are not enough for high schoolers meeting and studying.

“I joke that between 3 and 6 p.m., the teen area is the entire library because they are everywhere,” he said.

Swanay said he is glad teenagers regard the library as a safe, comfortable space and there’s an opportunity to really engage teens even more.

“We should be something creative and dynamic with the teen area,” he said.

CHANGES FOR THE FUTURE

Carmel’s library has shelving space for 300,000 books, 46,000 audiovisual items and 665 periodicals. But the size of the collection doesn’t define the library.

“It used to be a library was judged by how many books it has in its collection,” Swanay said. “While that’s important, it’s also important to have a real comfortable enjoyable space to be in.”

Swanay said he wants to reconfigure the library to provide an enjoyable experience to browse for a book, similar to a bookstore layout.

“Browse, though, and see a lot of covers and not just spines,” he said.

In addition, he said he’d love to see a creative design for the story time area for children and possibly more space for digital media services. CCPL rented retail space on Main Street to house its Digital Media Lab nearly two years ago, and Swanay said it’s been a big hit, so there’s a growing demand for more space for similar services.

The Carmel Clay Public Library shared its vision for the future at a public meeting April 19. Library Director Bob Swanay said community input was vital in deciding which aspects of the library needed improvement.

The library hired design firm MSR Design to help develop the vision, but plans for specific construction projects are not yet under way.

“You’re not going to see architectural designs tonight, but you will see some imagery that will give you an idea of how this vision works,” Swanay said at the meeting.

Attendees had the opportunity to complete a survey asking their opinions on specific aspects of the library’s vision, such as the opening of a west side branch, the installation of a drive-up window for book returns and the expansion of internal spaces.

“We’ve always had a strategic plan that has guided us for the next three to five years,” Swanay said. “This vision is bold and ambitious enough to drive to the library for the next decade or two decades.”