You are at:Home»Current in Carmel»Carmel Community»Carmel tea room to celebrate royal wedding with buffet, viewing party 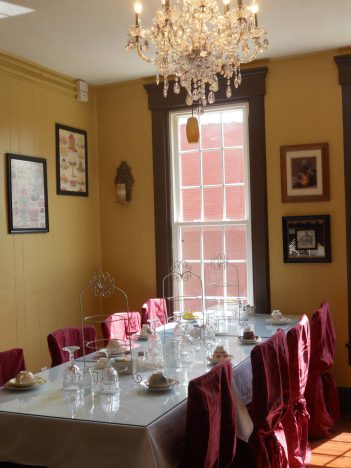 The tea room will host a buffet to celebrate the Royal Wedding at 11 a.m. and 1:30 p.m. May 19. The event will consist of tea and a viewing party of the royal nuptials.

“[The Royal Wedding] is an amazing event because it’s bringing Britain and America together again in such a positive way and we wanted to be a part of that history,” owner and chef Tina Jesson said.

The wedding buffet will include a selection of British food and feature Eaton Mess cake and the Groom’s Cake that Prince William had at his wedding, which Princess Diana developed with her personal chef for Prince Harry’s and Prince William’s birthdays. Jesson believes Prince Harry will have the same Groom’s Cake, a chocolate cake with chocolate ganache, at his wedding.

“We have the recipe that Princess Diana’s chef put together,” Jesson said.

To top it all off, Tina’s Traditional Old English Kitchen will also serve a lemon and elderflower cake, which will be the couple’s wedding cake.

“So few people are able to see it live. This is our contribution to bringing people together as if they’re going to be there,” Jesson said. “Everyone is welcome to be a part of history on their doorstep.”

“We’re going to get everyone to dress as if they are going to be going to the wedding,” Jesson said. “It will be like being there.”

Jesson moved from the county of Derbyshire in England to Carmel in 2008. Jesson launched Tina’s Traditional Old English Kitchen in 2014 after selling fresh made scones at local farmers markets and developing a tea party catering service. The menu includes British recipes from her mother, grandmother, a former scullery maid during the time Downton Abbey was set. Jesson trains her team on her great-grandmother’s 100-year-old technique for butter bread.

Tickets are $50 per person and available online at tinastraditional.com.