You are at:Home»Current in Carmel»Carmel Community»Carmel mayor to run for 7th term in 2019

Carmel Mayor Jim Brainard has announced he will seek a seventh term in office in 2019. 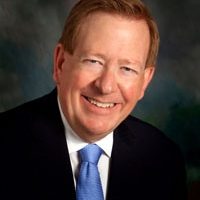 “I love my job, and I believe that we’re making progress and making Carmel one of the best places anywhere to live and work and raise a family,” he said. “We’ve assembled a tremendously talented staff, and I’d like to continue making those positive changes.”

Brainard has been in office since 1996 and has seen the town’s population almost quadruple in that time.

All seven seats on the Carmel City Council — plus two to be added as Carmel becomes a second class city — will also be on the ballot in 2019.