Peter Fulton is only 16. But he is already an accomplished performer with an impressive singing resume.

And it’s about to receive a major enhancement. 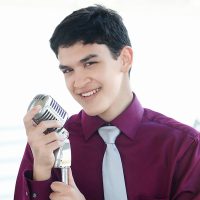 A Fishers resident, Fulton has been chosen to participate in the 2018 Songbook Academy summer intensive at the Center for the Performing Arts in Carmel. Open to high school or homeschool students between the ages of 14 and 18, only 40 are selected from across the U.S. for the eight-day program.

Fulton, a veteran of multiple talent show competitions, vocal workshops and stage performances, looks forward to the start of the July 21-28 academy, which is designed for young singers who have an interest in the classic music celebrated in the American Songbook.

“Because we live not too far from The Palladium in Carmel, I’ve had the privilege of watching many Songbook Academy performances over the years,” Fulton said. “I feel honored and privileged to have been selected as a finalist of the Songbook program this year.”

Fulton, who will be a senior this fall at Colonial Christian School in Indianapolis, began singing at age 7 when he attended a musicial theater camp at King of Glory Lutheran Church in Carmel. He has since participated in many other theatrical and musical programs throughout the area, including Michele’s Studio in Fishers, the Belfry Theatre in Noblesville and Jr. Civic Theatre at the Booth Tarkington Civic Theatre in Carmel.

Moreover, he has competed in a host of talent shows, including the Indiana State Fair Vocal Throwdown, the Hamilton County 4-H Talent Show and CarmelFest Has Talent. He first auditioned for CarmelFest at age 10 and will participate again in the July 3-4 competition, where he’ll sing “Evermore” from the live-action “Beauty and Beast” film.

Fulton is one of five semifinalists in the 16-and-older division of CarmelFest. The semifinals are from 3 to 5 p.m. July 3 on the Gazebo stage. The top three advance to the July 4 finals, which run from 3:30 to 4:30 p.m.

“I think vocal performance is both appealing and challenging to me because it involves not only singing but also acting and bodily presence,” Fulton said. “It’s an effective form of storytelling because it’s able to hold an audience’s attention.”