You are at:Home»Current in Carmel»Carmel Community»Recovery from broken leg leads to full-ride scholarship for Carmel student

Annie Wiese broke her leg in middle school, but the stroke of bad luck turned out to be a good thing in the long run.

The Carmel resident and recent graduate of online school Indiana Connections Academy recently received a full-ride scholarship to the University of Notre Dame. Half of the scholarship is for academic excellence and half is for diving, a sport she fine-tuned after her injury. 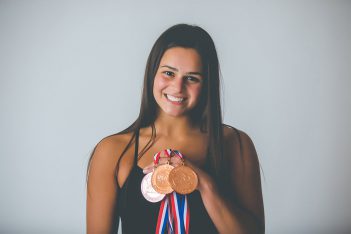 Annie Wiese of Carmel displays some of her diving medals. (Submitted photo)

“I went to Clay Middle School for sixth and seventh grade,” Wiese said. “Right before eighth grade I broke my leg. I had to have this trauma surgery, and I wouldn’t have been able to go to school for the entire first semester, anyway. I didn’t want to miss it and get behind, so I started online school.”

During her recovery, she was approached by a diving coach whose team was comprised strictly of homeschoolers.

“They practiced during the day. I tried it and it worked out for me,” Wiese said. “It’s different than other schools because of the versatility. It’s online and I could do my work on my time.”

Her hard work training even paid off in the form of a U.S. Olympic Trials qualification in 2014.

“I am very fortunate to be recruited to Notre Dame, so I am going to compete for the swimming and diving team,” Wiese said. “The team is cool because there are 25 female swimmers, and five of us girl divers. I just wanted to use diving to get me into the best university. I want to gain everything I can while attending a really good school.”

She plans to major in history and has a firm career goal.

“I want to be a presidential biographer. I want to have a Ph.D in U.S. Presidents,” Wiese said. “My dream job is to run the Kennedy Library, which is a branch of the National Archives in Boston.”