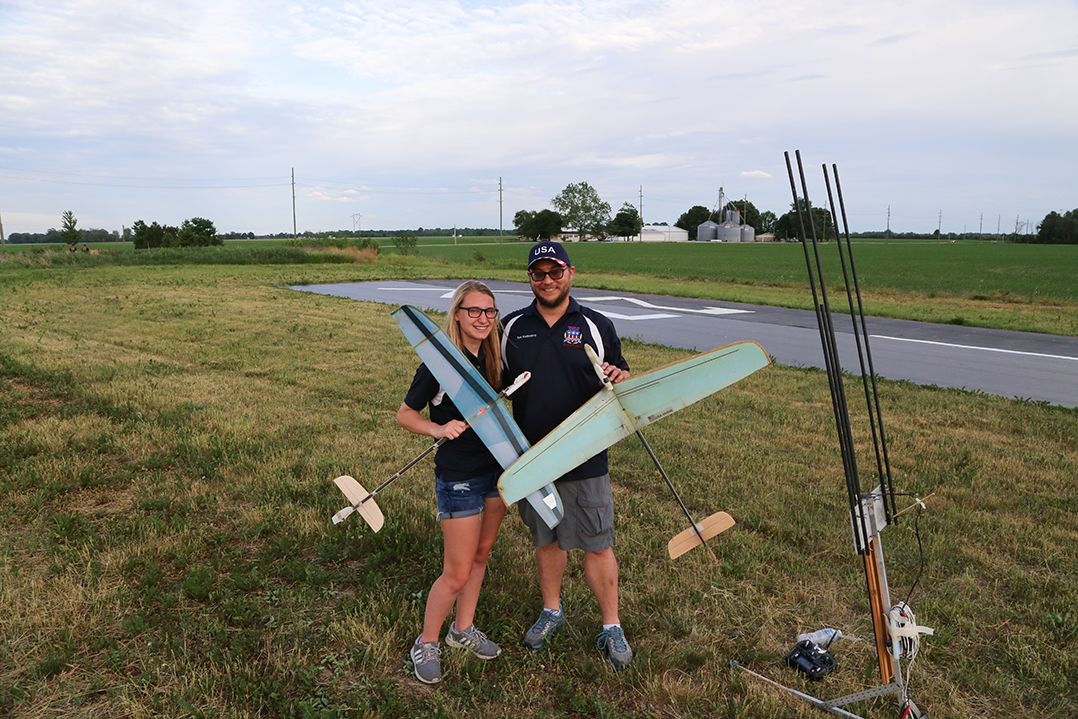 Carmel’s Ryan Woebkenberg and his daughter, Katie, are taking their model rocketry overseas to compete in the July 28 FAI World Championships for Space Models in Wloclawek, Poland. They previously competed in the 2010 championships in Serbia.

In July 2017, Ryan and Katie competed at the National Association of Rocketry Annual Meet in Michigan, which is the qualifying competition for the World Championships. Each nation sends three contestants from the junior and senior categories of each event, of which there are nine.

At NARAM, Ryan qualified for the team, but Katie did not until two other juniors dropped out. Katie, 14, will competitively fly the Junior RC Rocket Glider event for the first time at the World Championships.

“(My dad) introduced this to me when I was very young, so I stuck with it because it was interesting and it’s just fun to see (the rockets) go off and just fly them around,” Katie said.

Ryan, a software engineer at Salesforce, has been building and flying model rockets since 1990, when he and a few friends formed a rocketry club, Laünch Crüe, in their hometown of Holland, Ind. To create a National Association of Rocketry-approved club, NAR requires that at least one member be 21 years old, so Ryan recruited his dad to join.

“I’d always been into space, like space shuttles and that kind of stuff, so I thought that was pretty neat,” he said.

Ryan passed down his passion to Katie.

“I started with her when she was 4 with this little paper rocket that you actually print the plans out on a printer on cardstock, and she cut it out, folded it and glued it together,” he said. “It shoots up 20 or 30 feet and then flutters down.”

By the time Katie was 6, she had already qualified for an event at the 2010 World Championships. The Woebkenberg family has since traveled all across the U.S. for meets.

“It’s been so interesting, because not only do I get a chance to watch Katie grow up in this, but all the other kids that are flying as well,” said Katie’s mother, Amy, a nurse practitioner. “That’s been really interesting. There’s such a camaraderie in this sport that it’s almost like when you do go to these contests that you’re going to a family reunion because you just get to know everybody so well.”

Amy and Katie want to launch a model rocketry club this year at Carmel High School, where Katie will be a freshman, to educate and encourage young men and women to get involved in the sport. 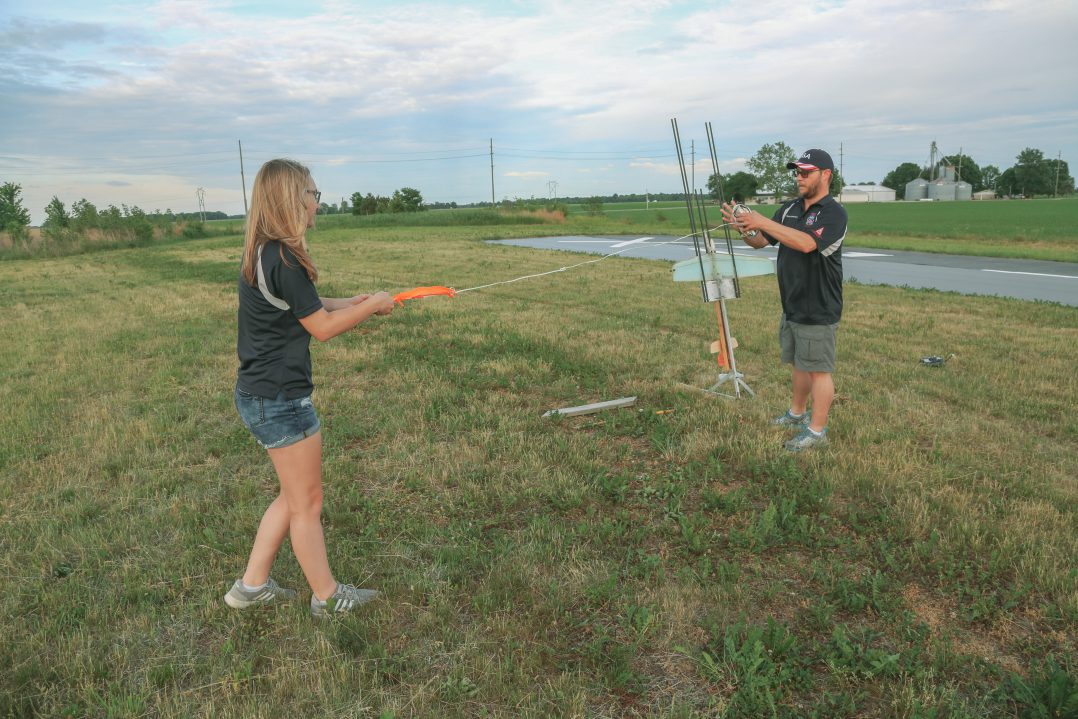 Katie and Ryan will compete at the Aug. 2 World Championships. Throughout July, they will build their rockets and fine-tune their skills.

Ryan said they will focus on repetition and flight in the wind.

“(The toughest part is) probably learning to fly during windy times, because (the rocket) just goes everywhere and it doesn’t let you do anything because it’s pushing against you or it’s pushing you somewhere you don’t want to go,” Katie said.

Rocket gliders shoot into the sky from a launch pad using a model rocket engine, then glide down to the ground. RC, signifying radio-controlled, allows Katie and Ryan to use a transmitter to send signals to a receiver on their model to control is direction, height and roll.

“There are not a whole lot of people who fly that,” he said. “Maybe only two dozen people in the country.”

After the competition, the Woebkenberg’s will spend a week traveling through Germany and Amsterdam.

“I’m really excited to go to Germany, because they have a lot of cool stuff there, the towns, especially, and the culture,” Katie said. “I’m really interested in Germany’s culture.” 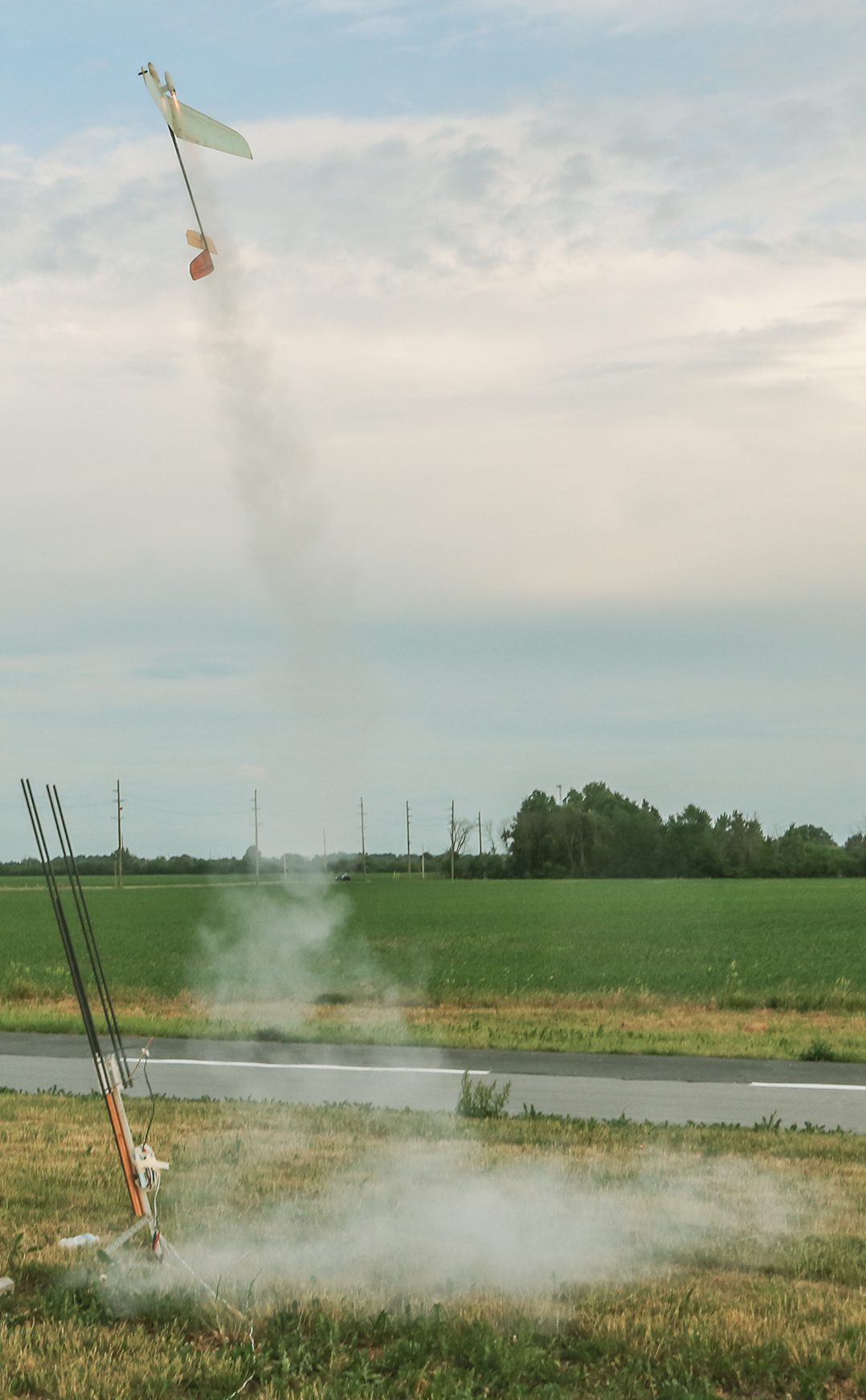 One of Ryan Woebkenberg’s model rockets launches at the NeST-RC Flying Site in Noblesville. (Photo by Ann Marie Shambaugh)