You are at:Home»Current in Geist»Geist Cover Stories»A different park: Geist waterfront park in early planning stages, input to be sought this fall

A $15.7 million price tag has given the City of Fishers a unique opportunity to develop directly on Geist Reservoir.

In May 2017, Mayor Scott Fadness announced plans to build an unnamed park on property where Irving Materials, Inc. operates a cement plant. Now, more than a year and a half later, the city owns the land at the southeast corner of the Olio Road bridge.

IMI will move out by the end of the year because Fishers acquired the land through  eminent domain. Some buildings will remain on the property through the construction process, but Fadness said the structures, aside from a cell tower, will eventually be removed. Fadness said approximately 40 acres of the acquired 70 acres is developable. 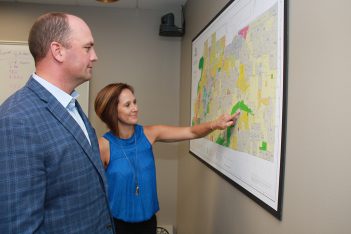 “The cost of the land was $15.7 million, and that was established through a court process that we went through,” Fadness said. “My goal all along was to make sure we could secure this land prior to it being developed. What goes on the park land, long-term, we can take some time and figure that out. However, if we hadn’t acted to secure the property, it would have been developed. The real win for us, at this point, is that we know, in perpetuity, that land and access to the water all belongs to the residents of Fishers and our community, rather than literally what could have been four or five homes.”

Fadness said he came up with the idea organically after driving by the site and wanted it to be a park. He spoke to Geist area residents about the concept.

“One of the conversations we had was about how we manage that lake in general and what we could do to really ensure that we’re making decisions that are in the long-term interest of Geist Reservoir and that area,” Fadness said. “As we started thinking about putting more development on an already crowded lake, that didn’t seem like a very good option. That dovetailed into the idea of, ‘How do we give Fishers residents access to the water? How do we lower the impact of development?’ That all kind of converged into this plan.”

Fadness said the park will not be like most other parks in the city and won’t be focused on youth sports.

“In general, people can expect the park not to be a traditional athletic park,” Fadness said. “It’s not baseball and soccer fields. We’re sensitive to create a design that complements the context in which it’s in. We didn’t use all these resources to secure land and then ignore the fact that it’s in this unique environment.”

Browning Day Mullins Dierdorf, a planning and landscape architecture firm, has been contracted by the city for a design plan. The Indy-based company has designed projects like the orangutan center at the Indianapolis Zoo, Grand Junction Park and Plaza in Westfield and the Conner Prairie Amphitheater.

“If you take a longer view of where our parks system has evolved over the years, the first decade of the 2000s, we were still catching up with the tremendous population growth and the insatiable appetite for youth athletics,” Fadness said. “So, most of the parks we built were very much utilitarian – Billericay we built for baseball, Cyntheanne we built for soccer, Cumberland we built for soccer, Mudsock was for football. Now, our investments are in creating a more well-rounded and dynamic park offering, and that’s where you see implements of Ritchey Woods and Flat Fork Creek Park, which really don’t have anything to do with youth athletics in the traditional sense. It’s rebalancing our parks system and certainly adding another dynamic.”

“If we’re going to have a lot of people enjoying the water from a pedestrian experience, I would not want to see that interwoven with motorized boats,” Fadess said. “The idea that we would have a boat marina where people could come park their boat, that would not be ideal. This is really more low-impact interaction with the lake – paddleboarding, kayaking, swimming, picnics, etc. If people want to ride their jet skis, they can go to the other end of the lake.”

“Towards the end of next year, we would start thinking about what we want to fund and whether or not we want to phase it,” Fadness said. “What’s fun about this park is that it can still be a really great amenity to the residents, even if it’s 25 percent done.”

“People will really start seeing (public input sessions) begin in November of this year,” McGrath said. “So, first we’re going to listen, and then we’re going to come back at the beginning of 2019 and say, ‘Here’s what we heard,’ and continue to get more input from the community as we finalize what that design and the amenities might look like for the long term.”

“We’re going to have a community conversation about what people want to see out there,” Mayor Scott Fadness said. “This park is in proximity to neighborhoods that are already established, and they have their concerns about what we’re going to build and what’s going to happen.”

In the meantime, while the city gathers public input, the reservoir will be dredged.

“This isn’t like any other park project I’ve been a part of,” Fadness said. “Now that we have the land, we have the opportunity to go do some dredging work on the reservoir at a significantly reduced cost, which also will benefit the long-term development of the park. If you were to go walk out on the property today, it’s basically gravel. So, if you want to have a green and environmental component to it, you have to do some kind of soil conditioning. The material that we would be dredging out of the bottom of Geist is very much organic. It’s like black dirt from farmland that gets washed down, plus part of the plant life that’s deteriorated and settled at the bottom. So, we have the opportunity over the next year to 18 months to pull that out and deposit it on the land to help condition the soil.”

“Really, over the next couple of months what we’re doing is our due diligence to know a little bit of what those variables might be that impact what we can and can’t do on this land,” McGrath said.