You are at:Home»Current in Westfield»Westfield Community»Boles speaks at Chamber luncheon

Surrounded by parked planes and helicopters, more than 170 people dined together at the second annual Westfield Zionsville Chamber Luncheon.

Tracy Phillips, executive director of the Zionsville Chamber of Commerce, said the two chambers began collaborating on the luncheon last year because there was so much crossover among members. 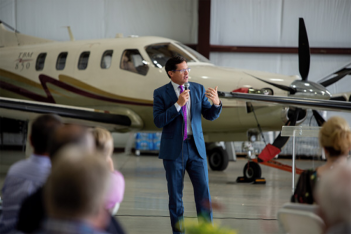 “We have many (people) who are members of both chambers,” Phillips said. “There are so many similarities between our chambers, our towns and our schools.”

Indianapolis Executive Airport and First Wing Jet Center hosted the event, opening up one of their hangars for the dining experience. Missy Estabrook, event coordinator for Westfield Chamber of Commerce, said seating was ample in the large space.

“It was a good chance for people to come out and network in a lunchtime setting,” Estabrook said. “Lots of people had never been there before and said it was really cool.”

“It was the perfect venue for Doug Boles to speak,” Phillips said. “At one point, a jet went by the open doors of the hangar where we were having lunch. Doug had to speak a little bit louder and he didn’t miss a beat.”

Boles touched briefly on some IMS history and spoke about ways to engage a younger audience in the digital era. But his speech focused heavily on applying the concept of the IMS — how it was founded and what it provides for the city of Indianapolis — to smaller towns like Zionsville and Westfield. The IMS founders were businessmen, not racecar drivers. They envisioned the track as a way to showcase Indianapolis and bring people to the city.

Boles commended the chambers for the work they do to improve the quality of life and commerce in their respective towns and challenged the audience to think of new ways to make their towns great places to live.

“The staff at the Westfield Chamber are phenomenal to work with,” Phillips said. “They are good friends and colleagues.”

“It gets the Zionsville crowd to this neck of the woods and the Westfield people over to Zionsville,” Estabrook said.

Phillips and Estabrook agreed that the relationship between the two chambers will continue.

“Business has no boundaries, and this is an opportunity for our members to cross-pollinate. That was the genesis of this luncheon,” Phillips said. “I think we’ll keep doing this for a long time.”