You are at:Home»Current in Westfield»Westfield Community»Author to discuss new Crazy Horse book in Westfield

During the 142 years since the Battle of Little Bighorn, countless volumes have been written about the infamous bloodbath, better known to history as “Custer’s Last Stand.”

Next to none of the accounts contain firsthand perspective from Native Americans. 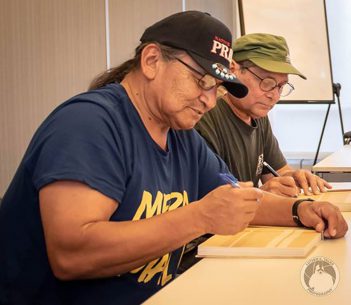 Documentary filmmaker William Matson discovered that fact when he set out to write a contemporary account of the 1876 armed clash between the U.S. 7th Cavalry, commanded by Lt. Col. George Armstrong Custer, and a coalition of Lakota Sioux, Northern Cheyenne and Arapaho warriors, led by, among other prominent chiefs, Oglala Lakota war leader Crazy Horse. The Native Americans won a decisive victory by killing Custer and 268 of his troopers.

While searching for Plains Indians’ accounts of the battle, and for details of Crazy Horse’s life in particular, Matson quickly discovered why retellings are largely one-sided: For decades, only one side has publicly talked about any of it. Until now.

His new book, “Crazy Horse: The Lakota Warrior’s Life & Legacy,” is, as the title implies, an oral history of the life of Crazy Horse as told to him by family members of Crazy Horse’s late nephew Edwin Clown. The occasion, according to Matson, marks the first time anyone inside the Lakota nation has publicly discussed Crazy Horse’s life or the mysterious circumstances surrounding his death.

“Crazy Horse and the Lakota people never fully engaged in our society, even though many of us think they did,” Matson said. “They ended up taking vows of silence and now is the truth coming out.”

Matson, a resident of Spearfish, S.D., and Lakota elder and Crazy Horse relative Floyd Clown Sr., who lives in Dupree, S.D. on the Cheyenne River Reservation, will discuss the book and conduct a signing from noon to 3:30 p.m. Oct. 6 at the Barnes & Noble in Westfield, 14790 Greyhound Plaza.

The appearance will be the 169th for Matson and Clown Jr. as they travel the U.S. and Europe discussing the life of Crazy Horse, who was killed in 1877 by a guard while trying to surrender to the U.S. Army at Fort Robinson, Neb. Controversy has clouded his death, characterized by some as an assassination, ever since.

“He had a vision that his own people and the soldiers were going to kill him 15 months before it happened, yet he still did what he did for his people,” Matson said. “Completely selfless.”

The discussion and book signing event is free and open to the public.