You are at:Home»Current in Westfield»Westfield Cover Stories»A new industry: Northpoint could put Westfield on the map for industrial business

Holladay Properties Senior Vice President Chris Wilkes doesn’t like the word “industrial” in referrence to business areas because it sounds dated. He prefers the term “business park” when describing the 300-acre Northpoint development bordered by 196th Street to the south and by Ind. 38 to the north between U.S. 31 and Grassy Branch Road.

“We are missing this element of our community, which is a high-end business park,” said Wilkes, a Westfield resident. “I’m really excited about this for a number of reasons, and it’s a wonderful addition to Westfield.”

So far, the only business in the Northpoint development is Bastian Solutions, recently acquired by Toyota Advanced Logistics, at the northwest corner of U.S 31 and 196th Street. The company specializes in advanced manufacturing. It broke ground on Phase I in 2017. Phase I should be complete in November. Phase II is projected to be complete in 2020 or 2021.

“There’s a group looking at a 50-acre project, that one in part would be a very large facility, so if you think about it, if you’re needing 50 acres, finding 50 acres in Hamilton County that are near U.S. 31, there are just not a lot. There aren’t any,” Wilkes said. “With Northpoint, we now have a wonderful land project to put into that discussion for those types of projects. So minus Northpoint, where would that 30- and 50-acre project be looking? There really wouldn’t be an area in Westfield to accommodate something like that.”

With Grand Park, Westfield is already on the map as a sports destination. But Westfield Mayor Andy Cook thinks Northpoint could raise Westfield’s profile as a center for industrial development.

“There aren’t too many places that are zoned that way,” Cook said.

Besides building on the business of sports asset within the city, Cook said advanced manufacturing will be another asset to Westfield.

“Our overall economic development plans are to build on two unique assets that we have,” Cook said. “One is to build the business of sports around Grand Park, so we will be pursuing companies across the country in the business of sports.  And likewise, we will be going after advanced manufacturing (companies) and playing on our asset of attracting a broad spectrum of employees.”

“We don’t have a park like that in Westfield, and I think that gives opportunity for companies like Bastian looking for a large footprint,” Wilkes said. “There were not a lot of options in Hamilton County up the U.S. 31 corridor until Northpoint.” 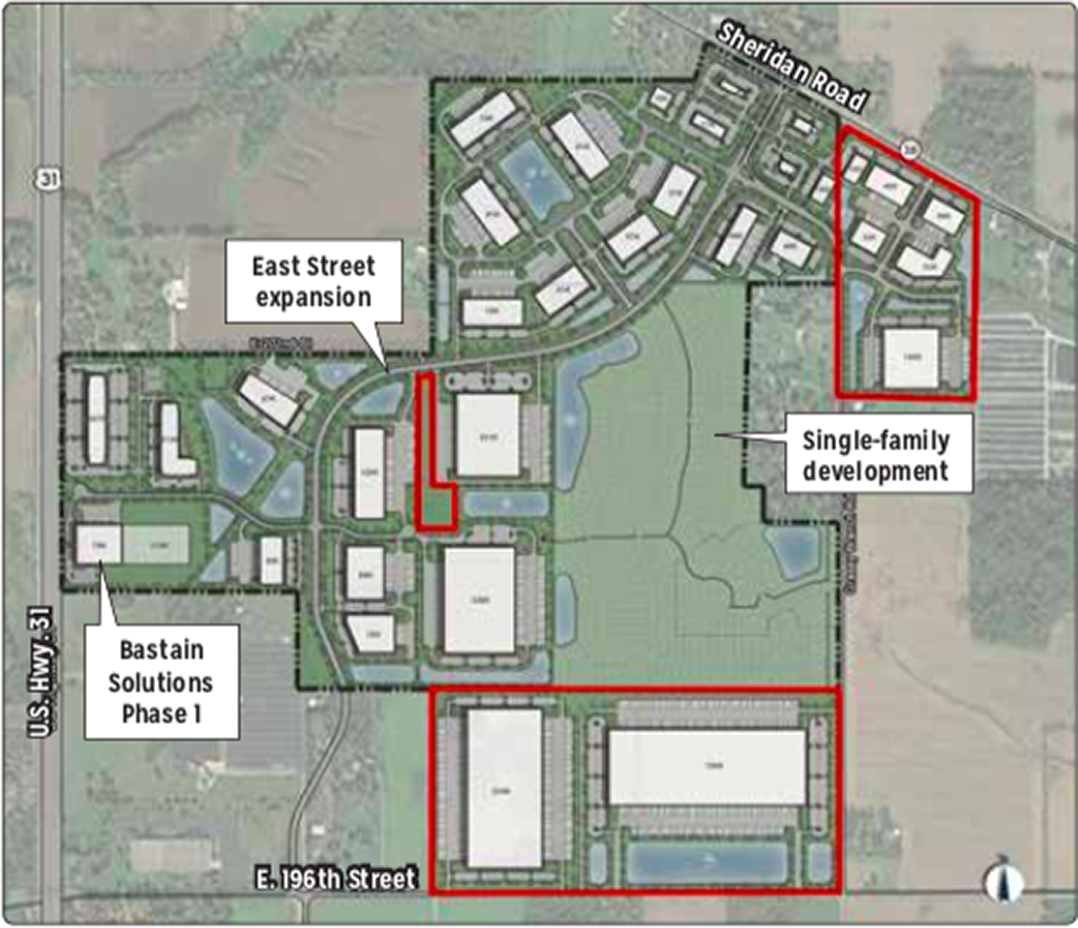 The master plan for Northpoint shows many spaces for industrial development, 80 acres for single-family homes and an expansion to East Street. (Submitted photos)

One of the developments Holladay Properties is best known for is the AmeriPlex development near the Indianapolis International Airport. AmeriPlex was developed in the mid-1990s.

“If you look at our park down here, the master plan was for there to be a park with nature and trails and preserved portions of the park in its natural state,” Holladay Properties Senior Vice President Chris Wilkes said. “It was recognized by Indiana Wildlife Federation as Indiana’s first wildlife friendly business park.”

Similar to AmeriPlex, Northpoint also is a masterplan business park.

“AmeriPlex is really the first of its kind as a masterplan themed park,” Wilkes said.