Fishers students in grades K-8 may attend a different school starting in the 2019-20 school year. Hamilton Southeastern Schools Supt. Allen Bourff will present a preferred redistricting proposal Nov. 28 during the district’s board of trustees meeting.

Interim Assistant Supt. Bill Carnes said the catalyst for redistricting is a referendum that passed in 2016.

“A lot of (the reasons behind redistricting) have to deal with the fact we were successful in the referendum,” Carnes said. “We reduced the people-to-teacher ratio, but the problem was we didn’t have any place for them, hence the birth of portable classrooms.”

The district has 35 portable classrooms, and the goal is to get as many students into buildings as possible. The redistricting process began during the summer.

“There was an inevitability about this conversation,” Carnes said. “When you are building a new elementary school, you know you have to redistrict to put children in there.”

HSE redistricted its K-8 students four years ago. School officials plan to use an evolved version of a similar process.

“It’s similar to the one we did last time, but it’s the 2.0 version of it. We learned things from the first time,” Carnes said. “It’s a community-driven, board-decision model. We are so serious about the community-driven part of that. The whole process is designed for the community to develop the plan for Dr. Bourff to present to the board.”

At the beginning of the process, parents were given access to a program which allowed them to take tiny pieces of HSE’s school district and move them around to see the best plans. Parents then came up with 18 different plans to further explore. The plans have been narrowed to three. They will be presented at two community dialogue meetings at 6 p.m. Oct. 24 at Fishers High School, 13000 Promise Rd., and at 6 p.m. Oct. 25 at Hamilton Southeastern High School, 13910 E. 126th St.

Carnes said the process is similar to a Rubik’s Cube, in that when one color changes, all the colors change. He said several elementary schools, such as Thorpe Creek and Geist Elementary, are over-crowded while others are under-utilized. Redistricting will balance grades K through 8.

In a video posted on HSE’s website, Bourff describes four reasons behind the decision to redistrict, such as the portable classrooms, balancing the over- and under-capacity buildings, opening the new Southeastern Elementary and to establish a feeder system within the district. 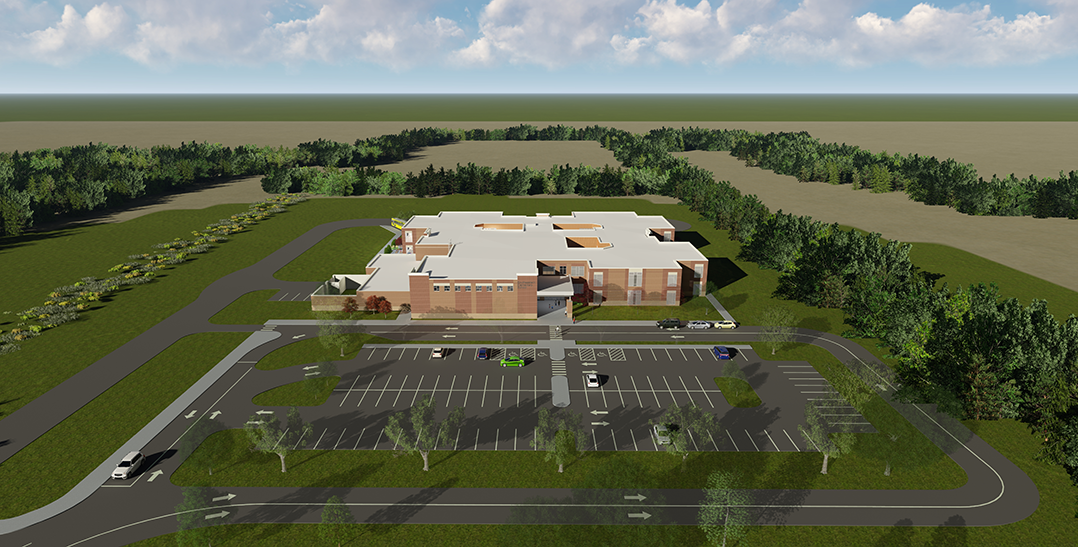 The two-story Southeastern Elementary will open to students for the 2019-20 school year. (Submitted rendering)

“In the end, we hope the redistricting process will accomplish the following to the greatest extent possible: Assign students to attend schools closest to their homes, attempt to design a feeder pattern, maintain neighborhoods and subdivisions, consider stability of programs for our Exceptional Learners’ instructional learning spaces, provide capacity at schools with the greatest potential for growth, reduce the number of portables and examine the continuation of choice as an option at (the) high school level,” Bourff said. “I understand this process can be unsettling to some of you, but every school within HSE is unique and a safe place to learn and grow.”

Hamilton Southeastern Schools principals will host celebrations at the start of the 2019-20 school year to better acquaint students with any changes from the redistricting process.

“They know children will be impacted by the move, and we want to make sure they are fully prepared for that move,” Carnes said. “(Principals) will be welcoming new students into schools, there are celebrations planned, a purposeful plan, to make sure children make the transition as easily as possible.”

During a previous redistricting process within HSE, the celebrations proved successful and Carnes said he believes next year’s celebrations will be equally as successful.