You are at:Home»Current in Noblesville»Noblesville Cover Stories»Yes or no?: A guide to the upcoming referendum vote for Noblesville Schools

The Nov. 6 midterm elections will decide many important races, but perhaps one of the toughest decisions facing Noblesville voters is whether Noblesville Schools should receive $50 million over eight years to pay for increased teacher salaries and safety enhancements across its 10 schools.

Noblesville Schools has had no problem passing referenda in the past, and while the district and its political action committee, MillerYes, are focused on educating the public of the facts, some parents and taxpayers in the school district are skeptical of the need for an additional $6.25 million annually.

“I think it’s important for people to understand that when the general assembly created referenda as a method of funding schools, Noblesville Schools was never fully funded at the level we were prior to the implementation of the tax caps,” Kozicki said. “The (2016) referendum was really just to maintain the level of service that Noblesville has had for decades. This is truly the first time we’ve really asked for additional, and it’s because our community has additional needs following (the shooting at Noblesville West Middle School on) May 25, and frankly, our teachers had additional needs before May 25 that we wanted to address.”

George Hodgson, a Noblesville resident since 1982, and whose three children attended Noblesville Schools, said he has long supported the district, but doesn’t believe the district has a clear enough plan for implementation of new safety initiatives and does not support the passing of the referendum.

“I think it’s a flawed plan, and I’m not convinced it is much of a plan,” Hodgson said. “It’s more of a lot of things thrown on the wall and saying how much money we need for those things, and I’m worried that’s what we’re going to get if this thing passes.”

Hodgson also said he believes many of the physical safety changes in the school buildings are reactive and that a more serious look at metal detectors would better serve as a deterrent than gun-detecting dogs or metal-detector wand screenings done at random or where reasonable suspicion exists.

What will the question look like on the ballot?

The question will read as follows:

“For the eight (8) calendar years immediately following the holding of the referendum, shall Noblesville Schools impose a property tax rate that does not exceed thirty seven cents ($0.37) on each one hundred dollars ($100) of assessed valuation, and that is in addition to all other property taxes imposed by the school corporation for the purpose of funding enhanced safety and security measures in all buildings, as well as to maintain academic and educationally related programs?”

What does approval mean for the existing referendum?

In 2016, Noblesville voters passed a referendum for education programming and staffing that the district has long said was to keep the “status quo” as it and other districts in affluent areas of Indiana continued to see a decrease in state funding.

According to Noblesville Schools, approximately $46.5 million has been cut from its funding since 2009.

How much would a household pay?

“It’s a very expensive plan, and if your business, my business, or any businesses had a plan that was this poorly thought through, no one would fund it,” Hodgson said. “So, I’m worried about the fact that it’s our taxes going up. We’re really being penalized to pay for something that, by in all appearances, is a flawed plan and probably way too expensive for what this could be done for.”

The referendum amount would be in addition to the home’s regular property taxes, and everyone in the Noblesville Schools district would pay, which is where much of the criticism strems from because not all those living in the district have children who attend its schools. However, Kozicki said even for households where Noblesville Schools students aren’t present, the referendum is an important investment.

“I am about to become an empty nester. My youngest child is a senior in high school, and it’s so imperative that we continue to support our future generations,” Kozicki said. “Our children are the people that will be leading our country in 25 to 30 years, so we want to be sure that we have best prepared them so they are ready to lead the future. Additionally, continuing to support our schools ensures that we maintain high property values. Eventually, we’ll all sell the homes we live in, and we’d like to have high property values when we do that.” 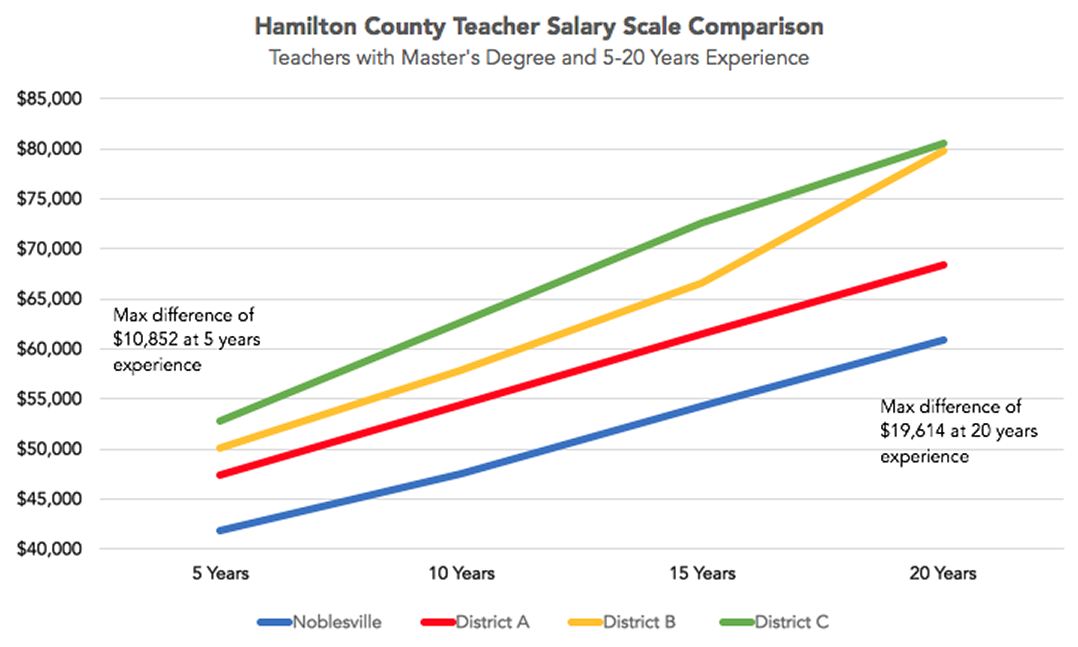 How do teacher salaries play a part?

Safety changes will take up a slight majority of referendum dollars, but 47 percent will go to address teacher salaries, attraction and retention.

A state and national teacher shortage is affecting Noblesville Schools and school districts in the area. During the past couple of years, those districts have increased teacher pay, but Noblesville has not kept up.

This is one part of the referendum Hodgson said he supports but is skeptical that the additional funds would fix the problem.

“I support, and have supported for years, having parity with teachers’ pay with, at least, the rest of this county,” Hodgson said. “That is a clearly big issue, but we’ve had a couple of other referenda since the law changed on property taxes, and both cases, (the district) has said teacher pay is one of the items that would be fixed. It’s clearly not fixed.”

District officials have said, in some cases, teachers have cited salary as a reason for leaving. One example from the district shows a teacher with 11 years of experience making above $20,000 more each year at a neighboring district.

“Even before May 25, we were already recognizing the impact that increased referenda in our surrounding districts were having on teacher pay, and we were beginning the process as a district how we were going to address the discrepancy in teacher pay, particularly in the mid-range years,” Kozicki said.

Money to pay for extra mental health and safety staffing is not grouped into the 47 percent chunk, but those new hires would be paid with referendum dollars. A

In addition, as class sizes continue to grow, Noblesville Schools is looking to add more teachers in the middle and high schools with referendum dollars. Approximately 23 new positions would be added in this category. However, Hodgson said he is unsure if it’s the job of the school district to handle mental health issues.

“I would also like to see some data on how successful having social workers and mental health (professionals) in the schools is,” Hodgson said. “To me, our schools should be focused on teaching our kids and keeping them safe. So, when we start replicating a mental health organization in our schools, we’re going a place that is very expensive and not where we should be. If they go down this route and sell this to the public, what happens when something slips through the cracks?”

“When you look at everything and how we can address needs for our schools, it just became clear that we needed to have these referendum dollars available to our schools so that we can appropriately compensate our teachers, so we can provide the security that our students need, and so that we can provide the mental health support that our students need,” Kozicki said. “Being a kid today is harder than it was, and that seems like a cop out, but it truly is. The rise of social media has just created a different world for our children, and it’s important that we help our children develop the skills necessary to live in this new environment.”

Early voting began Oct. 10 and can be done by visiting the Hamilton County Government and Judicial Center, 1 Hamilton County Sq., Noblesville. Hours for early, in-person voting at the courthouse are 8 a.m. to 4:30 p.m. Monday through Friday. Ballots also can be cast on two Saturdays before the election, from 9 a.m. to 4 p.m. Oct. 27 and Nov. 3. The last day to vote early is the day before Election Day, Nov. 5, from 8 a.m. to noon. On Election Day, Nov. 6, polls open at 6 a.m. and close at 6 p.m.

For absentee or more early voting information, or to find your polling place, visit hamiltoncounty.in.gov/220/absentee-early-voting.

A BREAKDOWN OF SPENDING

How would the money be spent?

The referendum will give Noblesville Schools approximately $6.25 million annually for eight years.