You are at:Home»Current in Fishers»Fishers Community»Fishers man to run in Indianapolis Monumental Marathon for a cause

Dan Mudra has run three marathons, but his fourth will be for a special cause.

Mudra is fundraising for Cure Sanfilippo Foundation in honor of Carson Burroughs, an 8-year-old with Sanfilippo syndrome type A, a rapidly degenerative, fatal childhood brain disease with no cure or treatment. 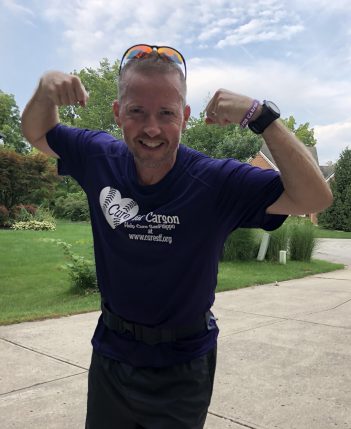 Dan Mudra, of Fishers, has been training for the Indianapolis Monumental Marathon and fundraising for Cure Sanfilippo Foundation since July. (Submitted photo)

Mudra, a Fishers resident, met the Burroughs family when his wife, Molly, worked with Carson’s dad, Craig. The Mudras moved to Fishers eight years ago. The Burroughs have since moved to St. Louis but the families have stayed in touch.

Mudra began training for the Indianapolis Monumental Marathon in July. He set training goals and race-day goals as pledge incentives. To date, he’s raised more than $10,000 in pledges from his family, friends and other supporters. He wants to raise $15,000 by the time of the Nov. 3 marathon.

“It’s been hard for me to make the times and the paces I’ve been trying to run,” he said. “Part of the big reason of doing this from the running standpoint, one of the motivators is I’ve always been pretty fat and slow, historically. I’m a 10-minute-mile runner, so I wanted to have some pace goals. I set those and integrated them into the fundraising. The whole idea was if I make certain training goals, then I earn those pledges people have given me.”

Mudra said every cramp, sore knee or side stitch while running is nothing compared to what Carson struggles with.

Throughout his training, Mudra has practiced with the Fishers Running Club. Several club members have donated money.

“That running club is such a good group of people to jump into a cause they just learned about minutes before,” Mudra said.

For more or to donate, visit irun4carson.com.