Duane “Dorn” Brenton jumped into the race for Hamilton County sheriff when it appeared that that Republican candidate Dennis Quakenbush would not be facing a challenger.

“I don’t like watching anybody run unopposed,” Brenton said. 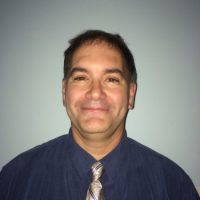 Since then, Jason Straw, a Democrat, also joined the race.

Brenton, a Libertarian candidate from Fishers, said his top priority as sheriff would be to end civil asset forfeiture, which is when law enforcement officers confiscate property or large sums of money suspected of use in a crime without necessarily obtaining a warrant.

“The sheriff is the highest law enforcement officer in the U.S., so he has the authority to say, ‘We’re not doing that anymore,’” Brenton said.

His other campaign platforms include decriminalization of marijuana and body cameras for law enforcement officers to increase transparency.

Brenton previously ran for the state senate and county commission. He served as a special deputy for several years at Wishard Hospital.

Brenton is married to Lucy Brenton, a Libertarian candidate running for U.S. Senate. They have 10 children. He graduated from Crispus Attucks Medical Magnet High School and studied chemistry, biology and computer science at IUPUI.