After eight years of competing in pageants and acquiring even more experience in the performing arts, Alexandria Audritsh was crowned queen for the first time Sept. 14. Audritsh, 16, competed in the Indy International Festival Pageant as a representative of Indianapolis Chinese Performing Arts, Inc. 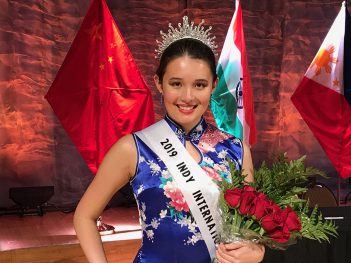 The Indy International Festival, hosted by the Nationalities Council of Indiana, is a weekend-long event featuring dancing, food, entertainment, art and more from different cultures from around the world. The 2018 festival is scheduled for Nov. 8-10 at the Indiana State Fairgrounds.

Audritsh, a Carmel High School junior, is no stranger to the spotlight. She has been ballroom dancing and performing Chinese folk dancing since age 5. She began singing at age 8.  She also has auditioned for TV shows and modeling agencies and performed in school and community theater.

To participate in the Indy International Festival Pageant, contestants must be at least 16 and be a representative of a cultural organization. Contestants perform in the categories of formal wear, talent, traditional wear and interview. For her talent, Audritsh sang a Chinese song.

As the 2019 queen, Audritsh will become a representative of the festival and her organization, ICPAI.

Outside of the festival, Audritsh will continue volunteering with ICPAI to share her culture. She said she wants to study business in college and pursue performing arts.