“It’s really hard to play Mary because most characters have an arc to them and they change throughout the story,” Roan said. “She just kind of shows up and does her job and then leaves. She has to be compassionate toward others, but she can’t really show it. She has to do a lot of talking with her eyes. That’s really fun and something I get to learn about.” 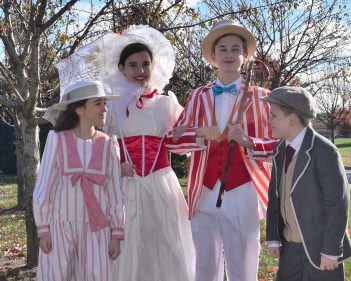 “I want to make it entertaining because it’s a lot different in the movie than it is on stage,” Roan said. “But I don’t want to change the character.”

“When I was auditioning, I didn’t know what I wanted,” Dillon said. “I didn’t think in a million years I’d get the role of Jane Banks because that is an amazing role. It was super crazy when I got it. I was hoping for a supporting lead or something fun, big or bold I could do because that’s what I like to play.”

“I’ve seen the movie many times and every time I liked it, but what I’ve found interesting about the musical is Jane and Michael are more bratty and harsh and mean,” Klinger said. “Most times my friends think I’m pretty annoying, so I guess it sort of fits.”

“I like that (Bert) is cheery and fun,” Plake said. “I try to be nice to everyone even though they are shrill and mean to me. I think it’s great he’s really positive.”

Nicole Johnson is the producer/director. Her husband, Greg Johnson, is a director/choreographer.

Donna Jacobi is the costume designer and Bernie Szuhaj is the tech manager.

“The biggest challenge for us is trying to create that beloved classic without all the exciting things you can do in movies,” Nicole Johnson said.

Tickets are $5 for adults and $3 for students. For tickets, visit creeksidetheater.ludus.com or purchase at Creekside book store during the school day.