You are at:Home»Current in Noblesville»Noblesville Community»Fighting back: County will use $500,000 in grant money to combat opioid abuse

The Hamilton County Council on Alcohol and Other Drugs has added more than a half-million dollars to its pool of resources after it was awarded three grants. The collective $590,343 will primarily be used for the planning, implementation and operation of quick-response teams to fight opioid abuse countywide.

The largest grant, $490,342, is from the Bureau of Justice Assistance, an arm of the U.S. Dept. of Justice. The other grants, $50,000 each, are from the Indiana Division of Mental Health and Addiction.

“We had applied for the federal grant in June,” said Monica Greer, executive director of the Hamilton County Council on Alcohol and Other Drugs. “We didn’t know yet if we were going to receive that when the Division of Mental Health and Addiction sent out (grant) proposals for the same type of thing, but on a smaller scale, so we thought we would apply for those as well, and long story short, we were awarded all three of them.” 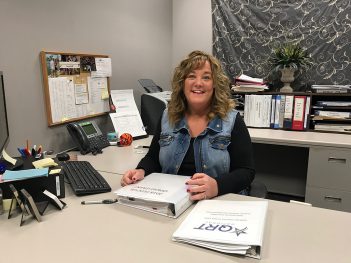 Monica Greer looks through grant paperwork in her office at the Hamilton County Government and Judicial Center in Noblesville. (Photo by Sadie Hunter)

The DMHA grants are intended for planning. The Council on Alcohol and Other Drugs has key players on board, including representatives from law enforcement and criminal justice agencies, fire departments, treatment centers, communications and 911 dispatch, data collection and agencies. Greer said approximately 45 members from the agencies are involved with the new initiative alone.

Efforts stemming from the DMHA grants will begin first in Noblesville. Greer said the quick-response teams should be up and running before the end of the month or early February.

The federal grant will encompass the entire county. The quick-response teams will be introduced in Noblesville, Fishers and the county’s smaller communities like Sheridan, Atlanta, Arcadia and Cicero. Carmel and Westfield already have similar programs, and Greer said her council plans to build off of those.

“(The DHMA grants) will give us time to develop and operate a small-scale run of what we’ll be doing, and (the federal grant) will give us the pieces we need to make this work county wide,” Greer said. “Probably within the next couple of months, we’ll start integrating those other communities.”

Greer said overall, quick-response teams will allow the county to provide resources at a level it hasn’t seen before.

“Right now, we don’t have any follow up for a person we interact with, so that’s the main change and addition,” Greer said. “With these grants, the target population is somebody who overdoses and is revived by Narcan (or naloxone, an opioid-overdose antidote) and survives. They go to the hospital, and once they’re released from the hospital, our coordinator will call them and say, ‘We’ve got this program, and we’d like to talk to you about it. Would you be willing to meet with our team?’ If we can’t get ahold of that person, we’ll just do a home visit.”

If the individual who overdoses is arrested, treatment programs are offered through the jail or referred by the court system. Greer said her council’s teams and programs that are changing as a direct result of the grants are for those who have slipped through the cracks or were not arrested for drug crimes, which happens when there is no evidence of drugs or paraphernalia.

“When our team meets with them, we’ll say, ‘Are you interested in treatment? What do you need to make that happen (insurance, transportation, etc.)?’” Greer said. “We’ll really get into all of their barriers to see what resources we can provide to help them get into treatment. That’s the ultimate goal.”

Once the changes are in place, Greer said a quick-response team will visit homes within 48 to 72 hours after the incident to check on the individual and provide support.

Quick-response team members also will canvas communities, going door to door to provide help. Each team is made up of a law enforcement official, a firefighter and a peer-recovery coach.

“The recovery coach will be someone who is in recovery themselves,” Greer said. “So, we’re hoping they’ll be more effective in encouraging patients to seek treatment. A lot of people in these situations want to get help, but when you are suffering from opioid addiction and going through withdrawals (it’s hard to find it).”

The grants also will create a Community Opioid Prevention Effort (COPE) coalition, whose members will compile information and provide community mapping for areas with a high frequency of opioid abuse.

“The ultimate goal is to get people into treatment,” Greer said. “We’re not going to turn anyone away.”

Source: Hamilton County Council on Alcohol and Other Drugs